Unmasking Europa: Of Ice and Controversy

You wouldn’t think the thickness of ice on a distant moon of Jupiter could emerge as something of a political hot-button, but that seems to be what has happened in the ongoing investigation of Europa. Thick ice or thin? The question is more complicated than it looks, because by ‘thin’ ice we don’t mean just a few inches, but perhaps ten kilometers, perhaps five. The key question is not a specific measurement, but whether the ice is thin enough to allow the surface and the global ocean beneath to be connected, in the form of occasional cracks, melt-throughs or other events. 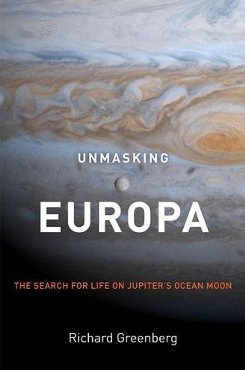 Much hinges on the answer. As Richard Greenberg shows in Unmasking Europa: The Search for Life on Jupiter’s Ocean Moon (Springer, 2008), the small world quickly fell under the scrutiny of scientists with a geological bent after first Voyager and then Galileo imagery became available. The latter was a problem, for the failure of the spacecraft’s high-gain antenna meant the total number of images was sharply reduced, and many questions that might have been resolved by now continue to be controversial due to lack of data. What we do have from Europa is on the order of 1,000 images, a small enough selection that, as Greenberg recently told me, it fits on a single CD.

The upcoming Europa Jupiter System Mission should remedy the lack. But that mission won’t get us back to Jupiter before 2026, and in the meantime, there is much analysis that can still be done on older datasets. And if you read Unmasking Europa, with its painstaking analysis of numerous Europa images, you’ll come away with the sense that the geological model is on extremely thin ice here. Yes, solids can often mimic the flow of liquids, as can be shown right here on Earth, but take a look at an area of so-called ‘chaotic terrain’ on Europa and the visible evidence for melt-through of the ice, followed by reformation in a new configuration, seems palpable.

We’re looking at chunks of crust that have undergone significant disruption, the re-frozen result of movement over the ocean beneath, following some kind of melting event. At least, that’s an interpretation that seems consistent with every image of such chaotic terrain that Greenberg shows, and he goes on to demonstrate that you can clip images of such terrain in order to ‘reassemble’ the features that had been there before the ‘rafts’ of individual material — often including distinctive ridges — broke away and floated into new positions.

I mentioned earlier the curiosity of the thickness of ice becoming a political issue, but in the highly-charged world of planetary science, that is exactly what happened. The debate has favored the thick ice model from the outset, but the fact that the new mission (Greenberg is on the design team for it, as are many proponents of the thick ice model) will have as a major goal to determine the thickness of the ice shows that Greenberg’s battle for a much thinner ice coating has had its effect.

The issue, of course, is critical for future study. An ice sheet a hundred kilometers thick makes investigation through some kind of ‘melt-through’ probe and submarine exploration that much harder, and diminishes the chances for life. But Greenberg, a celestial mechanician, demonstrated how powerful are the tidal forces acting on the Jovian satellites, particularly Io and Europa, and how much heat they may produce. Thin ice is a model that seems well supported by Greenberg’s evidence, and one that makes the possibilities of detecting life considerably more likely.

We discussed this by phone the other day in terms of the early study of these matters and how it explained what Voyager first found at Jupiter:

“When it was first proposed by Stan Peale and people at NASA Ames that you would have enough heat to do a lot at Io and even keep the H2O melted at Europa, that was such an outrageous idea that its proponents had to be extremely conservative. To make that case you had to say that even with a modest amount of heat, the water can remain liquid. If they’d said that a lot of heat could keep almost all the water liquid, then that would have been radical and hard to sell. But as time has gone on it has become apparent there is no problem having lots more heat. The amount of tidal heating of Io is way beyond what they had estimated, and the same is true of Europa.”

Yes, and what a surprise Voyager scientists had after Peale and team’s prescient call, just weeks before the flyby, that both Europa and Io should be very lively places on the basis of tidal effects alone! Greenberg recalls slapping his hand to his forehead when discussing the idea with Peale, realizing that the numbers pointed inexorably to the outcome that Voyager actually found — volcanic activity on a tortured Io, and growing evidence for substantial amounts of water inside Europa.

So much rides on this debate. For if there is demonstrated interaction between the global ocean and Europa’s ice sheet, we may not have to use submarines or drilling apparatus at all. A probe won’t last long in Europa’s radiation-bathed environs, but it could be shielded to last long enough to land near a Europan ridge where cracked ice may have exposed indigenous life forms to quick re-freezing. Moreover, not just tidal effects but underwater volcanic activity could be keeping this pattern of ice disruption alive and enhancing the likelihood of life.

This is a peppery, fascinating account that spares no detail in analyzing the varied topography of Jupiter’s ocean moon, but also offers a look inside the science of major space missions and how they are managed. It is filled with insights into the problems of observational bias in analyzing images and the all too human failing of seeing what we want to see. Can a geological model, of necessity assuming a thick ice mantle, explain the numerous features Greenberg analyzes here? It is hard to see how, for the model doesn’t adapt well to this non-Terran environment, even if it will take another mission to nail down the case once and for all.