With an atmospheric pressure one hundred thousand times less than that on Earth, Pluto becomes an even more intriguing object than usual when it moves closer to the Sun in its 248-year orbit. This period, occurring now, causes the temperature of the surface to increase, and that causes what had been frozen nitrogen (with trace amounts of methane and, probably, carbon dioxide) to sublimate into gas. Studying these matters with ESO’s Very Large Telescope, astronomers have now found unexpectedly large amounts of methane in that atmosphere. 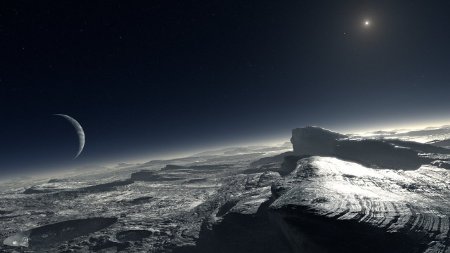 Image: Artist’s impression of how the surface of Pluto might look, according to one of the two models that a team of astronomers has developed to account for the observed properties of Pluto’s atmosphere. The image shows patches of pure methane on the surface. At the distance of Pluto, the Sun appears about 1000 times fainter than on Earth. Credit: ESO/L Calçada.

A second discovery: The atmosphere of the distant ice world is some forty degrees Celsius hotter than the surface, so that the global weather on Pluto seems to be characterized by a thermal inversion, with warm air sitting above cold (this is the kind of pesky weather situation on Earth that can trap smog and sharply reduce visibility). Sublimation seems to be the cause of this inversion. Think of winter snow evaporating even when it never moves through a liquid state, or comets approaching the Sun, their coma and tails forming through the effects of sublimating ice.

Warming the atmosphere, sublimation in turn cools the surface. The model for all this draws on spectrographic observations that show methane represents about half of one percent of the atmosphere. The team, led by Emmanuel Lellouch, believes that two different models can explain these findings at Pluto, one involving a thin layer of methane at the surface, the other invoking distinct areas of pure methane. From the paper:

Two scenarios… have been described to explain this elevated methane abundance (i) the formation, through surface-atmosphere exchanges, of a thin methane-rich surface layer (the so-called “detailed balancing” layer), which inhibits the sublimation of the underlying, dominantly N2, frost, and leads to an atmosphere with the same composition as this frost (ii) the existence of geographically separated patches of pure methane, warmer than nitrogen-rich regions, and which under sublimation boost the atmospheric methane content.

New Horizons should be able to tell us more when it reaches Pluto/Charon in 2015. Until then, I’m inclined to agree with Hans-Ulrich Käufl, a co-author of the paper on this work, as he describes the team’s use of the CRIRES spectrograph on the VLT: “It is fascinating to think that with CRIRES we are able to precisely measure traces of a gas in an atmosphere 100,000 times more tenuous than the Earth’s, on an object five times smaller than our planet and located at the edge of the Solar System.” Indeed.

The paper is “Pluto’s lower atmosphere structure and methane abundance from high-resolution spectroscopy and stellar occultations,” in press at Astronomy & Astrophysics (abstract).