We now have on the order of 335 confirmed exoplanets, with an ongoing race between the CoRoT and Kepler teams to find the first Earth analog in the habitable zone around another star. CoRoT’s shorter observation cycles make finding a terrestrial world around a G-class star problematic — the orbit would necessarily be on the order of a year, and the transit would then have to be confirmed with additional transits and whatever radial velocity observations could be mustered. But CoRoT just might find an Earth-class planet in the habitable zone of a K-class star, so we shouldn’t assume Kepler is necessarily going to win the ‘habitable Earth’ race.

I mentioned a few days back that the Planetary Society has unveiled its new Catalog of Exoplanets, a fine resource with the basics on detection methods and a glossary that complements a catalog filled with helpful orbital animations. If you want to get a quick read on a given exoplanet, take a look here. Some of these planets have gone beyond the stage of being purely numerical designations to emerge as places in their own right, with our deepening knowledge making them come alive. How long will it be before we start naming these worlds?

Consider HD 189733 b, some 62 light years from us, a hot Jupiter orbiting at a distance of some 5 million kilometers from its star. Because we found this one (four years ago) by radial velocity methods and then were able to pull off a transit detection, HD 189733b has become one of the best understood exoplanets we’ve studied. Who would have thought, back in 1995 when Michel Mayor and Didier Queloz identified 51 Pegasi b, that within fifteen years we would be creating an absorption spectrum of an exoplanetary atmosphere, revealing gases like water vapor, methane and carbon dioxide, mixing with potassium, sodium and ammonia?

The Catalog of Exoplanets has a section that runs through the most notable finds thus far, including the 55 Cancri system, where five planets, all of them gas giants, orbit the star with the most exoplanet detections. Here we’re in interesting territory in terms of the habitable zone, because 55 Cancri f is a Saturn-sized planet near the zone where water could exist on a planetary surface, leading to inevitable speculation about rocky moons and their potential for life. And then there’s Gliese 581 c, well known because of its nearness to the habitable zone and the media attention that followed its discovery, along with icy ‘super-Earth’ Gl 581 d. 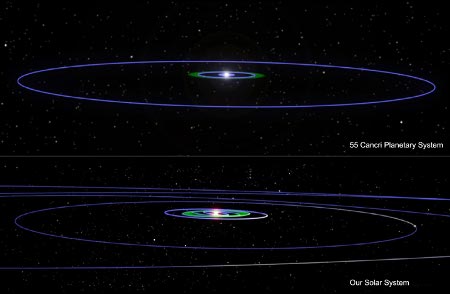 Image: The system around 55 Cancri in comparison to our own. Credit: NASA/JPL-Caltech.

What I’m thinking is that a browse through the Catalog of Exoplanets now is going to be memorable when you consider what will be in the catalog within a decade or so. Sort of like jumping from site to site back in the early days of the Web, when the explosive growth of commerce and search engines and personal pages had yet to occur. How fascinating and yet sparse the Web was then, and how much richer it has become. Will the Catalog of Exoplanets a decade hence list hundreds of terrestrial planets, many in the habitable zone of their stars? The odds seem to favor it, though our planet hunter spacecraft will have the next word.

And a final thought: Given the budgetary problems that have beset the Space Interferometry Mission (now known as SIM Lite, a change of name that speaks volumes) and the mutating Terrestrial Planet Finder concepts, Kepler has emerged as the NASA planet hunter with the most to prove. If it turns out that we find few terrestrial worlds where we think there should be many, the impetus for more advanced missions to characterize planetary atmospheres, for example, is bound to be weakened no matter when the economy begins to recover. Let’s hope Kepler and CoRoT both yield a continuing harvest of small new worlds.

Next post: Rare Earth? Not Enough Data to Know