Most stars in our region of the galaxy are low-mass M-dwarfs, making the investigation of their planetary systems quite interesting. If we learn that stars like these, which comprise over 70 percent of the galactic population, can be orbited by Earth-like planets, then the galaxy may be awash with such worlds. But some models have indicated that Earth-sized planets would be rare around these stars, working on the assumption that scaled-down versions of the Sun’s protoplanetary disk would tend to produce only low-mass planets.

Clearly, we need to know more about the masses of such inner disks, since available mass seems to be a key to the formation of habitable planets. Extrapolate the early nebula from our own Solar System to lower protoplanetary disk masses around M-dwarfs and the terrestrial worlds that form are no larger than Mars — they’re small, dry, worlds unlikely to develop life. Low-mass disks would seem to lead to low-mass planets.

But what if those M-dwarf protoplanetary disks aren’t just scaled-down versions of our Sun’s? Fortunately, we can use accretion simulations to study the possible results of varying these parameters, which is what Gregory Laughlin and Ryan Montgomery recently set out to do. From their paper:

Time and again over the past decade, nature has surprised planet hunters with the sheer diversity of planetary systems. Experience has shown that planet formation under a variety of conditions can be more efficient than the example of our own system would suggest. Our approach in this paper has been to investigate a planet building model that lies at the optimistic, yet still justifiable range of formation scenarios. Should our picture prove correct, then the prospects for discovery of truly earthlike, alarmingly nearby, and potentially habitable planets may lie close at hand. 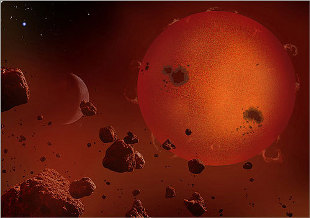 I like that ‘alarmingly nearby’ phrase! To set about investigating this, Laughlin and Montgomery weigh different disk and star mass scenarios. They study both Io and GJ 876d for clues, looking for reasonable answers to the question of disk density at a close orbital radius from low mass stars. They draw on the formation of the moons of Jupiter as inspiration for their model.

Image: In learning more about how planets form around M-dwarfs, we’ll discover how common Earth-mass planets may be. Credit: David Aguilar/Harvard Smithsonian CfA.

And indeed, the simulated M-dwarf planets that emerge from their simulations are worlds with more similarities to Jupiter’s larger moons than to Earth or Venus. Using an M-dwarf some twelve percent as massive as the Sun as their base, the team simulates the accretion of planetary embryos through the late phases of growth, finding that systems of three to five planets could emerge with masses comparable to Earth’s in stable orbits in or near the habitable zone, along with one to two planets per system with masses comparable to Mars.

The further good news is that a terrestrial world like this around a nearby low-mass M-dwarf should be detectable with radial velocity measurements. Narrowing the sample of local stars to a prime catalog of 169 M-dwarfs, the team tests for detection possibilities from the ground and, with a larger range of targets, from space, the latter simulated by plugging in the characteristics of the proposed TESS (Transiting Exoplanet Survey Satellite) spacecraft. While ground detections are marginal, the simulation showed that a space observatory like TESS would find some seventeen of the simulated planets after a two year survey. It wouldn’t take much, in other words, to put this theory to an early test.

Not only that, but a low-mass star offers up a readily detectable field for a transit of a planet of this size. And because the Laughlin/Montgomery model would produce planets that are poor in volatiles (and thus smaller in radius for a given mass than their volatile-rich counterparts), a Doppler wobble combined with a transit could determine whether this scenario is viable.

All of this used to seem so utterly theoretical, but with both CoRoT and Kepler in space, we’re getting used to the idea that finding Earth-class planets may not take more than another couple of years. Learning that habitable worlds are possible around the numerous red dwarfs in our neighborhood is clearly something we can accomplish, with the added advantage of learning much about how these planets form. The paper is Montgomery and Laughlin, “Formation and Detection of Earth Mass Planets Around Low Mass Stars,” accepted by Icarus and available online.