Saturnian Transits (and a Memory)

Every now and then a new space photo completely snares the attention. This one is a Hubble shot showing four of Saturn’s moons moving in front of the planet. Note Titan at the top, while below it from left to right are Enceladus, Dione and (at extreme right) Mimas. To see the smaller moons, you’ll want to click the image, which will take you to a zoomable view that captures these tiny satellites against the immensity behind them. 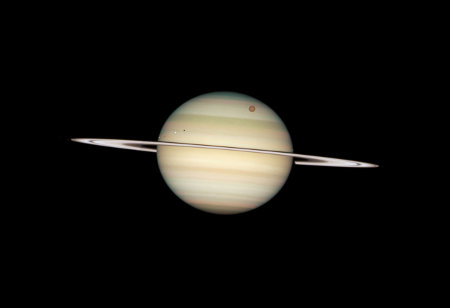 Image: Saturn and four of its moons, as seen by Hubble’s Wide Field Planetary Camera 2 on February 24, 2009, when Saturn was at a distance of roughly 1.25 billion kilometers from Earth. Hubble can see details as small as 300 km across on Saturn. The dark band running across the face of the planet slightly above the rings is the shadow of the rings cast on the planet. Credit: NASA, ESA, and the Hubble Heritage Team (STScI/AURA).

The transit of the four moons is an unusual event because the rings only become tilted edge-on to Earth every fourteen to fifteen years (they’ll be completely edge-on on August 10 and September 4). The composite image below also shows the four transits, this time with labels, but again, be sure to click the image to get past our formatting limitations. 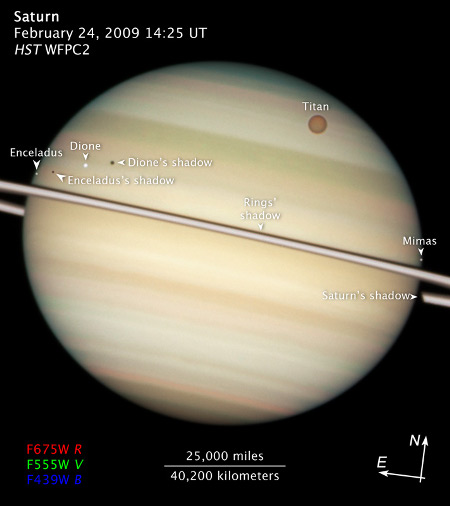 Early 2009 turns out to have been an excellent viewing season for those with small telescopes, who could watch moon and shadow transits across the face of Saturn. Titan has crossed the planet on four separate occasions since January. All of which takes me back to the little three-inch reflector I had as a boy, which I turned almost immediately to Saturn for a prized view of the rings. I can still recall the otherworldly feeling that came over me as, standing in my front yard in St. Louis, Missouri I suddenly brought Saturn into focus. It was small, almost minuscule, but the image burned bright as a jewel in that frosty Midwestern night.