Spotting transiting planets is what missions like CoRoT and Kepler are all about. The next step, getting a read on what’s in the atmosphere of any transiting, terrestrial world, is going to be tricky. The biomarkers like ozone and methane, so crucial for determining whether there’s life on a distant planet, are beyond the range of existing spacecraft. But the the next generation James Webb Space Telescope is also in the works, scheduled for launch in 2013. 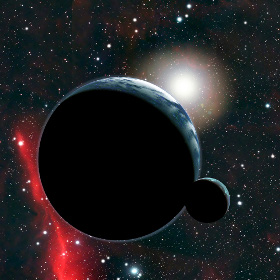 For nearby Earth-class worlds, JWST may be up to the task, at least for terrestrial planets that transit. In fact, if Alpha Centauri A turns out to have a transiting Earth-like planet (a major if!), it would take only a few transits to study the light filtering through its atmosphere to look for signs of life. Alpha Centauri is problematic in any case, but a recent study shows that the method — breaking down the star’s light during a transit to look for the characteristic markers — could be extended to other stars, provided enough transits can be measured.

Image: This artist’s conception shows a hypothetical twin Earth orbiting a Sun-like star. A new study shows that characterizing a distant Earth’s atmosphere will be difficult, even using next-generation technology like the James Webb Space Telescope. If an Earth-like world is nearby, though, then by adding observations of a number of transits, astronomers should be able to detect biomarkers like methane or ozone. Credit: David A. Aguilar (CfA).

“We’ll have to be really lucky to decipher an Earth-like planet’s atmosphere during a transit event so that we can tell it is Earth-like. We will need to add up many transits to do so – hundreds of them, even for stars as close as 20 light-years away.”

If we’re looking at a planet in an Earth-like orbit around a G-class star, then a ten-hour transit once a year is the best we can expect, meaning that collecting a hundred hours of transit data would take ten years. But the same world orbiting in the habitable zone of a red dwarf would make many more transits in the same amount of time because of its proximity to the primary star, which is why Kaltenegger says nearby M-dwarfs “…offer the best possibility of detecting biomarkers in a transiting Earth’s atmosphere.”

The paper is Kaltenegger and Traub, “Transits of Earth-like Planets,” accepted by The Astrophysical Journal and available online.