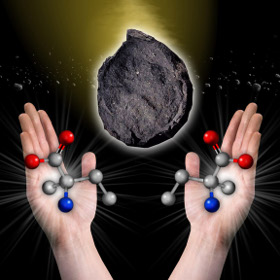 It’s a question with ramifications for life elsewhere in the universe. Suppose the day comes when we finally get a robotic lander to Enceladus. The news flashes around the world: Life discovered on one of Saturn’s moons! But is it truly an extraterrestrial microbe, or the result of contamination from our own lander? Assuming the microbe is based on right-handed amino acids, its extraterrestrial credentials seem assured. But what if it’s left-handed? For that matter, what if left-handedness is fairly common?

We’re beginning to gain evidence for the possibility. In a study of meteorites with an abundance of carbon — carbonaceous chondrites — Dworkin and Daniel Glavin examined their samples for the amino acid isovaline. Chemical reactions in the presence of radiation or temperature can cause amino acids to switch from being left-handed to right and vice versa, but the beauty of using isovaline in these studies is that it preserves its handedness for billions of years. Moreover, there is no question of contamination, since isovaline is rarely used by life.

The result: Three types of carbonaceous meteorites showed more of the left-handed verson of isovaline than the right-handed kind. Is there a bias toward left-handedness in space? If so, that could make the search for extraterrestrial life a bit more tricky. Dworkin amplifies:

“If we find life anywhere else in our solar system, it will probably be microscopic, since microbes can survive in extreme environments. One of the biggest problems in determining if microscopic life is truly extra-terrestrial is making sure the sample wasn’t contaminated by microbes brought from Earth. If we find the life is based on right-handed amino acids, then we know for sure it isn’t from Earth. However, if the bias toward left-handed amino acids began in space, it likely extends across the solar system, so any life we may find on Mars, for example, will also be left-handed.”

So we may find that life based on left-handedness is the norm, a fact that could imply that the crucial choice of ‘handedness’ is readily solved. Dworkin goes on:

“On the other hand, if there is a mechanism to choose handedness before life emerges, it is one less problem prebiotic chemistry has to solve before making life. If it was solved for Earth, it probably has been solved for the other places in our solar system where the recipe for life might exist, such as beneath the surface of Mars, or in potential oceans under the icy crust of Europa and Enceladus, or on Titan.”

The paper is Glavin and Dworkin, “Enrichment of the amino acid l-isovaline by aqueous alteration on CI and CM meteorite parent bodies,” Proceedings of the National Academy of Sciences March 16, 2009 (early edition). Abstract online.