Saturn’s G Ring Gets a Moonlet

Our fascination with ringed worlds continues to grow as we learn more about what circles the worlds of the outer system. If you’re looking for what may be the most spectacular ring system imagined — two ringed exoplanets locked in a tight gravitational embrace — be sure to read Jack McDevitt’s novel Chindi (Ace, 2003), and spend some time with his crew on the surface of the moon that orbits their center of mass. Meanwhile, join Tau Zero journalist Larry Klaes as he focuses on continuing revelations from Cassini about Saturn’s rings and the moons that feed them. And join us in our celebration of the extended Cassini mission. Who knows what discoveries await?

In the 1968 novel version of 2001: A Space Odyssey, author Arthur C. Clarke said that the magnificent rings of the gas giant planet Saturn were made by visiting advanced extraterrestrial intelligences who tore up some moons in the Saturn system in the process of making their incredible Star Gate. This artificial cosmic wormhole would ages later transport fictional astronaut David Bowman to another part of the Universe in order to transform him into “something wonderful.” 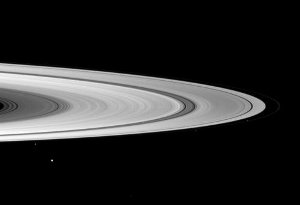 While most scientists are not inclined to believe or suggest that the rings of the second largest planet in the Solar System were made by some aliens on a construction project, they now think that Saturn’s rings were formed with the planet at the beginning of the Solar System roughly five billion years ago. Over the eons, moons would both smash into each other or be torn apart by Saturn’s massive bulk, creating the extensive rings we now see girdling the planet.

This process continues today. As the first space probe missions to Saturn discovered several decades ago, the rings are still being formed by a number of moons and even smaller moonlets, which contribute debris to the countless number of icy boulders and dust that make up the ring system.

There was one ring section that did not seem to have a moon or moonlet involved in its continued existence, the outer dusty ring labeled simply G. There was an extra collection of material at a certain point in the thin ring, but scientists operating the Cassini probe that is now entering its fifth year in orbit about Saturn had been unable to discover if the G ring had a companion world.

Now the Cassini imaging team, which include members of the Astronomy Department at Cornell University, have at last found the moonlet which supplies the debris for the G ring. The discovery was reported in the March 3 International Astronomical Union (IAU) Circular # 2093.

The moonlet, which has been given the provisional label of S/2008 S1 until an appropriate name from ancient mythology can be chosen, is the 61st known natural satellite for Saturn. This is just two less than the Solar System moon record holder, Jupiter, the largest planet in our celestial neighborhood. 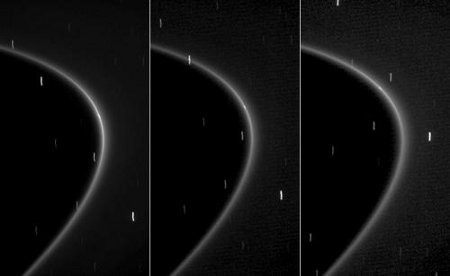 Image: This sequence of three images, obtained by NASA’s Cassini spacecraft over the course of about 10 minutes, shows the path of a newly found moonlet in a bright arc of Saturn’s faint G ring. In each image, a small streak of light within the ring is visible. Unlike the streaks in the background, which are distant stars smeared by the camera’s long exposure time of 46 seconds, this streak is aligned with the G ring and moves along the ring as expected for an object embedded in the ring. Credit: NASA/JPL/Space Science Institute.

S/2008 S1 is deeply embedded in the main arc of the G ring. The moonlet’s very small size, only 600 yards across (Earth’s Moon is 2,160 miles in diameter, by comparison), explains why it eluded Cassini’s electronic eyes and those of its imaging team until now.

“Before Cassini, the G ring was the only dusty ring that was not clearly associated with a known moon, which made it odd,” said Matthew Hedman, a Cornell Cassini imaging team associate. “The discovery of this moonlet, together with other Cassini data, should help us make sense of this previously mysterious ring.”

Hedman and colleagues suspected that debris from collisions between micrometeorites and objects within the arc are the likely source for the material that makes up the G ring.

“We had evidence that there were big particles in the arc and thought that collisions between these objects and various micrometeoroids could release the dust that formed the ring,” Hedman said. “[This moon is likely] one of the objects that dust is knocked off of to form the ring.”

There may be other moonlets within the G ring arc, but S/2008 S1 is likely the biggest member of that group. Cassini will be able to photograph this region of Saturn again in 2010 and 2015 to get actual images of the moonlet and any companions in the arc. The discovery images of S/2008 S1 and others taken since then only show a faint smear of light, which is understandable considering the moonlet’s small size.

In addition to providing material to its ring, the little moonlet shares another feature with the other satellites that are involved with their rings: It and the arc are in resonance with a larger outer moon, in this case Mimas, which is best known for having one large crater that makes it look like the Death Star from the film Star Wars. The G ring is the second farthest ring system from Saturn at a distance of 100,000 miles. 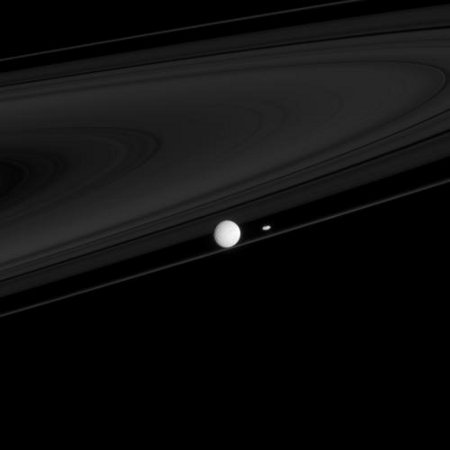 Image: Two other moons that have profound impacts on the rings, Mimas and Prometheus, are seen here with the F ring. Mimas (396 kilometers, or 246 miles across), the larger and much more distant of the moons, creates the Cassini division between the A and B rings. Prometheus (86 kilometers, or 53 miles across), although much smaller than Mimas, is half of a duo responsible for maintaining the narrow F ring. Credit: NASA/JPL/Space Science Institute.

Last July Cassini was given a two-year extension on its mission and a resulting new designation: The Cassini Equinox Mission. The probe will do sixty more orbits of Saturn during that time, flying by the planet’s largest moon, Titan, 21 times to conduct further radar mapping of the bizarre and fascinating surface otherwise hidden beneath thick orange clouds. Cassini will also make seven close passes of Enceladus, the moon which the machine found to have active geysers spewing ice crystals into space. Both satellites are future targets for deeper exploration, in no small part to see if they are abodes for some kind of life.