New propulsion technologies are under study in the laboratory, even if finding the funding for such work is always a problem. James and Gregory Benford have demonstrated that a powerful microwave beam can push an ultra-light carbon sail even to the point of liftoff under lab conditions at 1 gravity. That’s useful information, for if we can leave the propellant at home, we can contemplate deep space missions driven by beamed microwaves, a technology that not only can pack a wallop, but is also less destructive to sail materials than a laser, meaning the sail can be brought to high temperatures more efficiently.

Yesterday we talked about a possible ‘Sundiver’ mission built around the microwave beaming idea. The Benfords’ version of this mission depends upon a second effect they observed in the lab. The photon pressure applied to the small sail they used could not account for the observed acceleration. Something was clearly coming out of the carbon lattice, but what was it? The sail material had been heated before the test to drive out any contaminants and the sail had been placed in a hard vacuum. James Benford told me about the feeling he got upon analyzing the sail’s performance under the beam:

I calculated and got two numbers for the total acceleration on our sail — somewhere between 9.8 and 13.5 g‘s. And I sat there and thought boy, what is this? How could we maintain such acceleration? The photons couldn’t do it, so something else was going on.

That something else turned out to be absorbed molecules — CO2, hydrocarbons and hydrogen — that become incorporated in the lattice when the material is made. Only at the highest temperatures do these residual molecules emerge. Mass ejected from the material under high temperature by this desorption process becomes another form of acceleration, observed in the laboratory as it forced the sail upward. Meanwhile, the original sail material remains unharmed by the desorption effect — the team’s final report is clear on the point, and I’ve seen Benford’s images of the intact sail.

The Uses of Desorption

Think, then, of a variety of compounds that can be ‘painted’ onto a sail, perhaps in multiple layers. Use the desorption process carefully and you have created a propulsive layer that can be triggered by microwave beam or the Sun itself. The Sundiver mission in this new guise now emerges: Launch the carbon sail via microwave so as to make layer #1 of this propulsive ‘paint’ desorb. Enhanced thrust through this combined beam/desorption method gives the sail 15 kilometers per second velocity, canceling most of its solar orbital velocity, and allowing a quick fall toward perihelion (using solar pressure alone would take years to spiral down).

At perihelion, the spacecraft rotates to face the Sun where, under intense sunlight, sail layer #2 desorbs, producing a 50 kilometer per second boost. The sail then moves away from the Sun, now acting as a reflective solar sail, its aluminum layer revealed. The Benfords have calculated that a Pluto mission could be accomplished in five years with these techniques, doubling the pace of our New Horizons mission, while paving the way for faster missions as the technology is tested and improved. 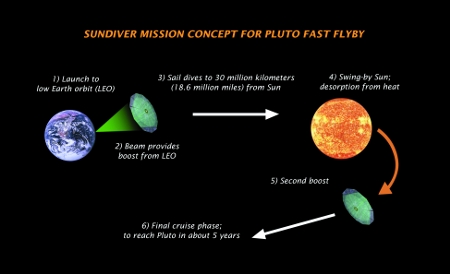 Image: The Benford Sundiver mission, aided by the propulsive effects of desorption.

What an intriguing concept desorption turns out to be, an effect discovered (but not anticipated) in laboratory work. Ponder what might have happened with the ill-fated Cosmos-1 mission if, upon successful deployment, the flight team had discovered the effects of desorption for the first time in space, with the sail showing propulsive effects no one had reckoned with. I asked James Benford about this in our conversation:

We had a design review at the Planetary Society with the Russian team on Cosmos and I raised the question, saying that we know that desorption takes place when you put any kind of a beam, any kind of heat source, on a material. And shouldn’t we take that into account in the experiment? The Russians said that effect was not important. Nevertheless, I got it onto the list of action items that it would be looked into.

The Russian team came back at the next design review and said actually it is important, but that it goes away in a couple of days. But Cosmos 1 as built had an asymmetric surface — the front and back were not the same. They were going to get more outgassing out the back surface than the front surface. So therefore when the sunlight hits it, the acceleration from desorption will in fact produce a negative acceleration. So the sail would actually be propelled backward for a little while.

We’re used to surprises on our space missions, but this one would have been a whopper. Now we can ponder the possible uses of this helpful effect in getting an extra boost to a mission that effectively combines a solar sail with beamed propulsion and, in a sense, rocket technology. But what about beamed propulsion over longer periods for moving beyond the Solar System? Could a sail riding a microwave beam for an extended period be stable? The answer is yes, not only through stable ‘beam-riding’ effects but because a microwave beam can communicate angular momentum to a sail to provide additional control. All of which is why microwave beaming is emerging as a credible deep space technology, and why we’ll be discussing it again in coming posts.

A good place to start digging on microwave propulsion is James Benford’s “Space Applications of High-Power Microwaves,” IEEE Transactions on Plasma Science, Vol. 36, NO. 3 (June, 2008). Zeroing in on desorption and its uses is the Benford’s “Acceleration of sails by thermal desorption of coatings,” Acta Astronautica 56 (2005), p. 593 ff.