We need to find a way to get NanoSail-D into space. You’ll recall that the original NanoSail-D perished in the explosion of a SpaceX Falcon rocket. But the opportunistic mission, a sail whose central components are three inexpensive Cubesats, two of which house a small, deployable sail, may yet get into the black. As we noted in this story from August of last year, a duplicate NanoSail-D is available. The trick is to find the funding and the booster. 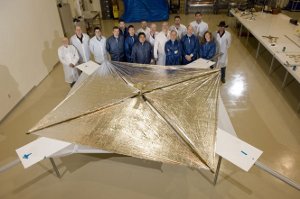 A joint project featuring The Planetary Society, NASA and the Russian Space Research Institute is attempting to do just that, looking at a solar sail experiment that may or may not involve NanoSail-D. The question is whether the 7 by 7-meter sail is the payload the mission planners will choose, the other option being a Russian-designed sail experiment of equally small size. You can read more about the design choices at The Planetary Society site.

Image: The Huntsville-based NanoSail-D team stands with the fully deployed sail at ManTech SRS technologies on April 16, 2008, after the successful deployment test.

Remembering what happened to the earlier Cosmos 1 sail, destroyed when the Volna rocket that was to put it into orbit failed, it’s reassuring to hear that the Volna is no longer an option. Launching the new sail on a Soyuz-Fregat booster is one possibility, but NASA seems to be holding out the option of a piggyback launch aboard a US vehicle. I still wonder whether another SpaceX Falcon attempt could be made. After all, the cost is minimal. A Shuttle launch comes in at $10,000 per pound of payload, while SpaceX promises costs as little as a tenth of this.

Figuring that NanoSail-D weighs less than ten pounds, we could be looking at the launch of an operational solar sail experiment for well less than $15,000, including margins. Moreover, SpaceX is a player. The company has already announced it would donate experimental payload space aboard an upcoming flight of its Dragon spacecraft to support the Heinlein Trust Microgravity Research Competition, just the kind of partnership that could also now be applied to solar sail research.

SpaceX was recently awarded a NASA contract to provide cargo delivery flights to the International Space Station. Thus the synergy between the NASA sail researchers and commercial space interests grows, a fact that has to be going through the minds of the solar sail team at Marshall Space Flight Center, as well as The Planetary Society planners and their Russian colleagues as they work toward concluding their nanosail studies this summer.

Ponder where we are today. Budget constraints have put an end to NASA’s solar sail work just at the point when we were closing on the vital next step, the deployment and operation of a test sail in space. Now we have a basic sail that can be augmented and enhanced to fly that mission, a potential spacecraft that sits in storage. Surely the lessons learned from building the Cosmos 1 sail can be applied in modifying NanoSail-D to gather data about controlling a solar sail in the environment it was designed for.