Kepler’s dust cover has now been jettisoned, meaning the search for extrasolar ‘Earths’ is not long from commencing. The cover stayed in place for so long because the spacecraft’s photometer had to make measurements of electronic noise that will later have to be removed from the science data. Mission engineers will now continue with the calibration process for several weeks using images of actual stars.

Our debates over the ‘rare Earth’ hypothesis will be getting firm data in short order because of Kepler. Three years from now, having had time to detect terrestrial-class planets in the habitable zone of their stars, confirm the detections and further examine the results, we should have at least a sense of how common such planets are. Finally we can move beyond informed speculation with the sort of hard data we need. And as far as the first terrestrial planet detection in the habitable zone, CoRoT may just beat Kepler to the punch.

Meanwhile, the astrobiological side of the ‘rare Earth’ debate gets more and more interesting with news that at least one important prebiotic chemical is in short supply around small M-dwarfs and their brown dwarf cousins. Have a look at the graph below, which clearly shows the gap in hydrogen cyanide (HCN) for small, cool stars as composed to Sun-like stars, whereas the baseline acetylene figures are roughly similar (and demonstrate that the method works). 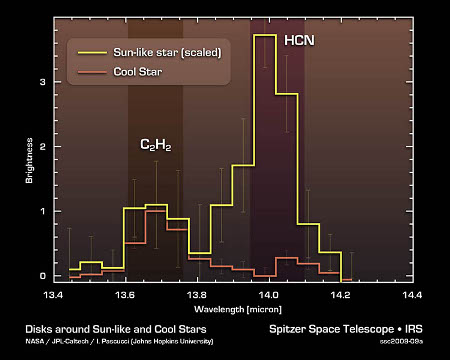 Image: NASA’s Spitzer Space Telescope detected a prebiotic, or potentially life-forming, molecule called hydrogen cyanide (HCN) in the planet-forming disks around yellow stars like our sun, but not in the disks around cooler, reddish stars. The observations are plotted in this graph. Light wavelengths are shown on the X-axis, and the relative brightness of disk emission is shown on the Y-axis. The signature of a baseline molecule, called acetylene (C2H2), was seen for both types of stars, but hydrogen cyanide was seen only around stars like our sun. Credit: NASA/JPL-Caltech/JHU.

Ilaria Pascucci (Johns Hopkins) is lead author on the paper on this (slated for the Astrophysical Journal), describing her team’s investigation of seventeen cool and forty-four Sun-like stars with the Spitzer telescope’s infrared spectrograph. These are young stars presumably in the planet formation process, and none of the M-dwarfs and brown dwarfs in the mix showed a notable hydrogen cyanide signature.

Thus we add substance to the problematic nature of life around red dwarfs. Stellar flares have always been an issue, although some believe they could serve as a spur to evolution under the right circumstances. But a deficiency in hydrogen cyanide is more troublesome still, for HCN is a component of adenine, a basic element of DNA. Says Spitzer program scientist Douglas Hudgins:

“Although scientists have long been aware that the tumultuous nature of many cool stars might present a significant challenge for the development of life, this result begs an even more fundamental question: Do cool star systems even contain the necessary ingredients for the formation of life? If the answer is no then questions about life around cool stars become moot.”

We still haven’t found a planet in the habitable zone of an M-dwarf despite the Gliese 581 c finding — the planet is now believed to be far too hot for liquid water to exist on its surface. If life on Earth got its impetus from prebiotic molecules in the early protoplanetary disk, then a lack of same under these conditions makes M-dwarfs look less and less hospitable. That’s a downer for those of us fascinated with potential life around these dim stars, but of course the investigation of these matters is in its early stages.