Imagine frozen pellets of deuterium and helium-3 being ignited by electron beams to produce fusion, all this occurring in a combustion chamber fully 330 feet in diameter. Such was one early concept for Project Daedalus, the British Interplanetary Society’s starship design that would evolve into a two-stage mission with an engine burn — for each stage — of two years, driving an instrumented payload to Barnard’s Star at twelve percent of the speed of light.

We’ve been kicking the Daedalus concept around here recently because the BIS is developing, in conjunction with the Tau Zero Foundation, Project Icarus, a revisiting of the original Daedalus concept. The Daedalus propulsion system required fifty billion fuel pellets, thirty thousand tons of helium-3 and 20,000 tons of deuterium, as massive an undertaking as our species has ever attempted, given that the helium-3 would have to come from the atmosphere of a gas giant like Jupiter. Icarus will study what Daedalus might look like with newer technologies. 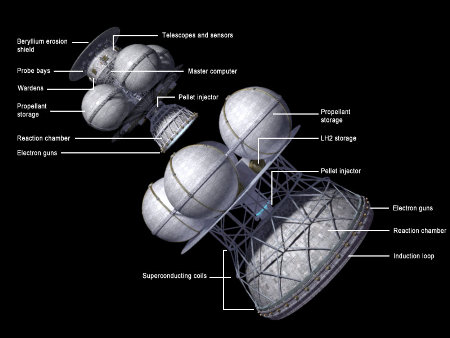 Image: A diagram of the Daedalus starship. Credit: Adrian Mann.

For propulsion inspiration, the original Daedalus team turned to Friedwardt Winterberg, who had studied fusion initiation through electron beams, and it was because of that involvement that Project Icarus team leader Kelvin Long contacted Dr. Winterberg again with news of the Icarus study. Amongst their e-mail exchanges were some comments I found interesting, and because Dr. Winterberg has given permission to use parts of these, I want to run one of them now. In this first excerpt, he speaks of the background of propulsion studies and what may be feasible as we expand into our own Solar System:

When I first had thought of the fusion-micro-explosion propulsion system almost 40 years ago, I never thought about interstellar spaceflight. I rather thought about a high specific impulse – high thrust propulsion system for manned spaceflight within the solar system. Instead of an interstellar probe, one could build in space very large interference “telescopes” with separation distances between the mirrors of 100,000 km, for example, in the hope to get surface details of other earthlike planets. And by going to 500 AU at the location of Einstein gravitational lens –focus, one could use the sun as a telescopic lens with an enormous magnification.

Yes, and it’s fascinating to speculate on how dramatically our observations of other solar systems may change our mission concepts. After all, when Daedalus was envisioned, no one knew whether there were planets around other stars, and Barnard’s Star was chosen specifically because there was at least some evidence of one or more planets there. A flyby probe would be a way to find and characterize these planets, but in fifty years or less, we may be able to see distant exoplanets clearly enough to limit actual missions to specific, high-value targets. Dr. Winterberg continues:

All this needs a very powerful propulsion system. Before going to Alpha Centauri (or Epsilon Eridani), one should aim at comets in the Oort cloud. Since there is water abundantly available, [this] invites the use of deuterium as rocket fuel. Unlike a DT micro-explosion where 80% of the energy goes into neutrons, unsuitable for propulsion, it is not much more than 25% for deuterium. A deuterium mini-detonation though requires at least 100 MJ for ignition, but this can be provided with a magnetically insulated Gigavolt capacitor, driving a 100 MJ proton beam for the ignition of a cylindrical deuterium target…

We’ve looked before at how this might be done, specifically in one of Dr. Winterberg’s papers, as examined by Adam Crowl in this essay. But how do we proceed to put this power to work? A primary destination emerges:

In reaching the Oort cloud, and there establishing human colonies, one may by “hopping” from comet to comet ultimately reach a “new” earth.

Recent research I believe, suggests that in already 100 million years the earth may become inhabitable through the loss of oxygen.

But 100 million years gives us still plenty of time.

Plenty of time indeed. The notion of moving from comet to comet is appealing, invoking as it does the possibility of a gradual expansion deeper and deeper into the Oort, with the prospect of eventually encountering comets in a similar cloud around the Centauri stars. Moving a step at a time may obviate the need for a single interstellar crossing, breaking it into stages. In any case, such a crossing would be an enormous undertaking, as Dr. Winterberg goes on to note:

I cannot see how except with gargantuan space craft interstellar space flight will ever be possible. And I have little taste to speculate about the surprises the physics of tomorrow might bring. It is possible that big surprises still wait for us, but the opposite is possible as well. Discovering the laws of nature is like discovering America. It may happen just once. I therefore like to think what is possible with what we know now. 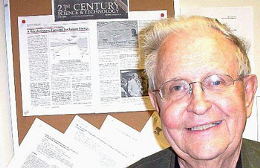 A sound approach, and one with the added benefit of not requiring new physics to work. The Tau Zero Foundation hopes to encourage both approaches, missions based on known physics and rigorous examination of possible ‘breakthrough’ concepts. We don’t know whether the latter will turn up or not, but we learn valuable lessons about the universe from the attempt to find them even if breakthroughs don’t emerge.

As to the size of a starship, my own guess is that gargantuan craft are not the future for our early interstellar probes, assuming we build such. It may well be that we can couple propulsion advances (possibly via beamed microwave or laser designs) with nanotechnology to produce robotic probes of extremely small size. But assuming we do follow the fusion route, here are Dr. Winterberg’s further thoughts:

And there I think fusion propulsion with deuterium appears quite obvious, with water (in the comets of the Oort cloud) in interstellar space widely available. But as we have known since the paper by Trubnikov (2nd UN Conference in Geneva in 1958 on the peaceful use of atomic energy), deuterium fusion with magnetic confinement is unlikely possible for a fusion reactor of reasonable dimensions. The situation is quite different with a deuterium detonation. There, the DD reaction produces T and He3, which in a secondary reaction burn with D. This was “nicely” demonstrated by the 15 Megaton fission triggered deuterium bomb test in 1952.

For propulsion, the pure fusion fire ball can with much higher efficiency (if compared to a pusher plate) be deflected by a magnetic mirror, also avoiding the ablation of a pusher plate. The ignition, requiring more than 100 MJ, can be done with some kind of particle accelerator. The LHC at CERN can store several 100 MJ energy in a particle beam moving with almost the velocity of light. No laser can that do yet. Unlike lasers, particle accelerators are very efficient. And to get a high fusion yield of say about 1kt, cylindrical targets with axial detonation should be used, where a mega-gauss magnetic field entraps the charged fusion products, as it is required for detonation.

The paper on this work is “Deuterium microbomb rocket propulsion,” which Dr. Winterberg presented at the 2008 Advanced Propulsion Workshop in Pasadena (abstract). Centauri Dreams thanks Dr. Winterberg for being willing to share this correspondence with its audience.