1951’s The Man from Planet X is a creepy Edgar G. Ulmer film involving an inscrutable alien whose small craft falls to earth in the moors of Scotland. There he is attacked, exploited and ends up being killed in spite of the fact that his real mission was apparently peaceable. The film is noir-like, the sets foggy and surreal, and although the dialog positively creaks, the moody atmosphere still puts a chill up my spine. 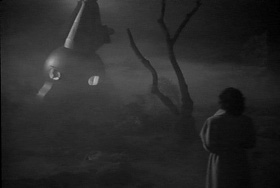 I mention this personal favorite because my copy of The Man from Planet X has a glitch, a defect in the aging tape that causes the image to jitter for a ten second period just as actress Margaret Field is getting progressively spooked by the strange alien craft. You would think that an upgrade to DVD is in order, and indeed, that’s my only real choice. But the other night, watching a DVD of Alec Guinness in the delightful Our Man in Havana (1959), I saw the image lock up and freeze, decomposing into pixels that reconfigured themselves only after a couple of minutes had passed. This, mind you, was on a relatively new DVD.

The Pleasures of an Older Medium

There are times when the older medium, VCR tape, is actually preferable in one sense — it recovers better from the kind of errors that can lock up a DVD. I think about these things because my obsession with the past and the recovery of seemingly lost history is very much involved with technology. Consider how image processing is now used to restore what was written on an ancient papyrus, or the way the Beowulf manuscript has been enhanced and re-examined through various electronic filters to tease out new information. See The Electronic Beowulf for more.

We are now able to extract information from palimpsests — vellum manuscripts once scraped and used again for new material written over the old — by imaging what was written in the earlier layer. Parchment was scarce in the Middle Ages, which is why a manuscript might be scraped with powdered pumice. The seemingly destructive practice yields at least some of its secrets to so-called multispectral filming, which recently recovered four-fifths of a priceless text by Archimedes. Various forms of x-ray imaging are also in play.

Lunar Images Back from the Dead

But back to space. The Lunar Orbiter Image Recovery Project shows us how heedless we’ve been in our rush to digitize. Located at NASA Ames, LOIRP had to acquire one of the last surviving Ampex FR-900 machines to play back analog data from our early Moon probes, information now being digitized to tease out new science. I think about that when I look at tape cassettes I recorded thirty years ago. I need a tape deck to play them and wonder how long cassette options, still built into many multimedia centers, will be available. Think of 8-track players.

Image: Restored Lunar Orbiter view of Earthrise over the Moon. The FR-900 tape drives that held this and other images sat in a Sun Valley, CA barn for several decades before this restoration was made.

If you have a collection of old data, as I do on my hundreds of old movies recorded over two decades, you’re faced with the need to move to new formats to keep it viable. Here again the oddity: We have written manuscripts that are readable from the last two millennia, physical objects whose one great characteristic is the preservation of the content they carry. The photos we stuffed in our living room drawers are still there, but how long will the online service that hosts our new digital snaps stay healthy enough to host them?

David Pogue recently talked to Dag Spicer, curator of the Computer History Museum in Silicon Valley, about the issue. Spicer had this to say:

One of the technologies for really long-term preservation was developed at Lawrence Livermore National Laboratory. It was, I think, a titanium disk about the size of a long-playing record, and it was supposed to last 10,000 years. But then they realized that there were some assumptions that weren’t right, and that it would not last 1,000 years, it might only last 20.

Otherwise, as far as I know, no one is working on this problem. It’s really in no one’s interest, no manufacturer’s interest; they want to keep selling you more hard drives every two to five years, or more blank CDs, and what have you.

Much of our early space data exists under the same cloud. We need specialized machines to read the information, and the machines are increasingly scarce. We’re in the data gap between analog and digital, a place in which a few fumbles can make key aspects of who we were in the 20th Century unrecoverable. Meanwhile, the Long Now Foundation keeps pushing the value of planning for the long term, a set of values that should eventually help us create data formats and methods that don’t, like too many old films, let our images and stories gradually deteriorate inside cannisters nobody ever opens.

We’ll get there, of course, but the experience should serve as an object lesson in how to place change in context. We are pushing inexorably toward a future that, some of us believe, involves movement into the outer Solar System and beyond. We are taking data at unprecedented rates through a wide variety of experiments and observations. The challenge will be to preserve what we have while going forward, a task that should be hard-wired into the design of future technology.