An Unseen Nearby Star?

It was Percival Lowell who suggested that anomalies in the orbit of Uranus might point to the existence of the body he called ‘Planet X.’ The discovery of Pluto in 1930 gave us confirmation of a planet beyond Neptune (since downgraded, of course), but the idea of other large bodies in the outer Solar System still has its appeal, and although we’ve found such interesting objects as Eris and Sedna, questions remain about what else might be found lurking at the fringes of the system.

Theories of the Outer System

Thus the active theorizing, which includes one study speculating on an Earth-sized planet at 100 to 170 AU, a body that would help to explain what we know about the architecture of the Kuiper Belt. Another investigation looked at a possible Mars-sized body at 60 AU, which would help us understand the distribution of various Trans-Neptunian Objects, a term that basically covers any object orbiting the Sun beyond Neptune.

Other theories abound, one of which sees a giant planet (roughly 1.5 times as massive as Jupiter) at 25,000 AU, causing perturbations in particular cometary populations in the Oort Cloud. References to these and other work can be found in a new paper by Lorenzo Iorio (INFN, Pisa), who goes on to look at what may be the most seductive of all these hypotheses, that a small star thousands of AU from the Sun may cause perturbations that affect the inner planetary regions. 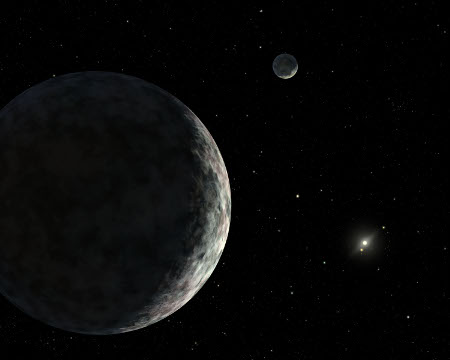 Image: An artist’s concept of the view from Eris with Dysnomia in the background, looking back towards the distant sun. What other objects, perhaps larger still, might lurk in the outer Solar System? Credit: Robert Hurt (IPAC).

A Companion for the Sun

It’s fascinating to speculate, as we have here often, about the existence of a star closer to us than the Centauri trio. Thus the ‘Nemesis’ theory, that the Sun is actually a binary star whose companion may well account for cometary impact events on Earth, a signature perhaps revealed by the periodicity of such events. Iorio weighs the evidence for a brown or red dwarf in such a configuration, looking at its gravitational effects on the inner rocky planets.

[Note the addendum below]. The result is a set of interesting constraints on what may lurk beyond our currently understood system. A brown dwarf of 75 to 80 Jupiter masses, for example, cannot orbit closer than roughly 1.8 to 1.9 light years from the Sun, while the minimum distance for a red dwarf ranges from 2.1 to 5.6 light years depending on its mass. If there’s a Jupiter-sized body out there, it should be no closer than 13,500 AU (recall that Proxima is 10,000 AU from the primary Centauri stars). An Earth-sized object might be found beyond about 750 AU but no closer.

Addendum: Within the last few days, the author uploaded a second version of this work which I didn’t become aware of until this PM (thanks, Bynaus!). In the second version, these numbers change significantly. A brown dwarf is now constrained to 3,736-3,817 AU from the Sun, while an M-dwarf must be no closer than 3,793 AU to 7,139 AU. Quite different results, and obviously even more interesting in terms of interstellar targets, if indeed it turns out that any such objects do exist. Dr. Iorio’s comment re the new version: “Rewritten version amending the previous one which contained a serious error. Results changed.” Indeed!

Filling Out the Census

Using Dr. Iorio’s computations, then, we can’t say that any of these objects exist, but only that if any of them do, they are not to be found closer than these figures suggest. The closest star could be far closer than the Centauri stars, although we do not, obviously, have confirmation that such an object is there. Finding a brown dwarf or an M-dwarf within several thousand AU would change the prospects for our first interstellar probe considerably, and would surely serve as an inducement to propulsion research if planets were to be found there. [This section re-written due to the changes to the paper noted above].

All of which is a useful reminder that even as we look into the remotest parts of the universe in search of cosmic history, we still have much to consider in regions not far from our own Sun. We have plenty of work ahead in building the local census. I also think of deep space explorers like Caltech’s extraordinary Mike Brown, whose investigations keep filling in the blanks in our outer system sketchbook. What challenging projects await the students Mike Brown’s generation is now training!