Gliese 581, the star that teased us a few years back with reports of a ‘super-Earth’ planet in the habitable zone, is back in the news. Michel Mayor’s Geneva team has located a fourth planet in the system, Gliese 581 e, which weighs in at a mere 1.9 Earth masses, making it the least massive exoplanet ever detected. Orbiting its primary in 3.15 days, the newly found world is too close to the star to be in the habitable zone, but the other shoe that drops here is that Gl 581 d may itself be. 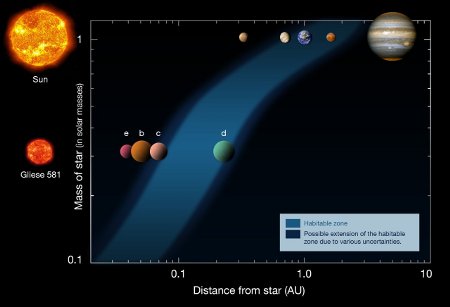 Image: By refining the orbit of the planet Gliese 581 d, first discovered in 2007, a team of astronomers has shown that it lies well within the habitable zone, where liquid water oceans could exist. This diagram shows the distances of the planets in the Solar System (upper row) and in the Gliese 581 system (lower row), from their respective stars (left). The habitable zone is indicated as the blue area, showing that Gliese 581 d is located inside the habitable zone around its low-mass red star. Credit: Based on a diagram by Franck Selsis (University of Bordeaux).

Watching this story unfold has been instructive. Early indications that Gl 581 c was in the habitable zone were quickly challenged, with a consensus developing that the planet was too hot for liquid water to exist on its surface. Indeed, it might well resemble Venus more than Earth, a notion that was rarely picked up by the media. The belief that Gl 581 c is habitable has become more or less codified in some quarters — a National Geographic special not long ago depicted it as a green and blue living world — long before the scientific process could come to a resolution on the matter.

At the same time, Gl 581 d, a planet seven times as massive as the Earth, was thought to be on the very outer edge of the habitable zone, a longshot candidate for liquid surface water. The Geneva team, in the process of discovering the new planet, has now refined the orbit of Gl 581 d, the updated work indicating that it could be an interesting place indeed:

“Gliese 581 d is probably too massive to be made only of rocky material, but we can speculate that it is an icy planet that has migrated closer to the star,” says team member Stephane Udry. The new observations have revealed that this planet is in the habitable zone, where liquid water could exist. “‘d’ could even be covered by a large and deep ocean — it is the first serious ‘water world’ candidate.”

So now we have firmer indications of a planet in the habitable zone. And as this news release points out, the progress of our work in the Gliese system is nothing short of phenomenal. Michel Mayor, the man who, along with Didier Queloz, was behind the planetary discovery at 51 Pegasi just a decade ago, notes that the mass of Gl 581 e is fully eighty times less than that of 51 Pegasi b. That’s also a reminder that low-mass red dwarfs are good places to look for small worlds, since the gravitational tug of close-in planets is more pronounced.

Look for the paper on this find to run in Astronomy & Astrophysics. It’s Mayor et al., “The HARPS search for southern extra-solar planets: XVIII. An Earth-mass planet in the GJ 581 planetary system,” available here.