A note from Eric Davis (Institute of Advanced Studies at Austin) fills me in on the details of the upcoming 6th International Symposium on Beamed Energy Propulsion, to be held in Scottsdale, AZ during the first week of November. Much of the program is of interest to interstellar studies, ranging from the basic science and technology of laser, microwave and particle beam propulsion to specifics relating the topic to beamed interstellar missions.

The latter subject will always be associated with Robert Forward, whose studies of beaming technology and sails made us understand that reaching the stars was not necessarily impossible. Lasers were the key, as Forward learned through his work with Ted Maiman at Hughes Research Laboratory. Years later he recalled his ‘eureka’ moment:

That exuberant statement is pure Forward, written in the poignant memoir he knew he would never finish after the discovery of his terminal cancer. I can only imagine with what gusto he would have approached the coming ISBEP conference, whose preliminary schedule is available at the meeting site. Like the other players in this field, Forward knew that beaming energy to a spacecraft gets around the sheer inefficiency of carrying fuel aboard a rocket and allows missions — and payload sizes — that would otherwise be impossible. 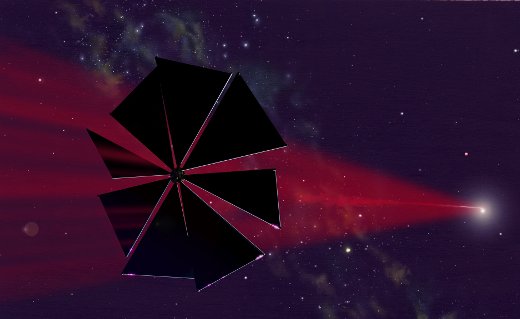 The idea goes back to Tsiolkovsky in the 1920s, and received a powerful boost from Arthur Kantrowitz, whose 1972 paper “Propulsion to Orbit by Ground Based Lasers” examined ways to lift small satellites into Earth orbit. Forward and later theorists like Geoffrey Landis have pursued laser beaming to solar sails that can, in some designs, be hundreds of kilometers to the side, although tiny micro-sail designs are also in play (and I notice that their proponent, Jordin Kare, is on the program committee for ISBEP).

So is Leik Myrabo (Rensselaer Polytechnic Institute), who has demonstrated the efficacy of laser beaming in laboratory experiments and continues to study ‘lightcraft’ technology for launch from the ground. Lasers, of course, are only one option, for microwave beaming makes possible a sail that can be ultra-light, composed of a non-continuous surface. James and Gregory Benford’s lab work on microwave sails shows how powerful the concept is. For that matter, particle beaming to a magnetic sail falls under the same rubric considered at the conference, although all such concepts demand major investments in space infrastructure before interstellar use.

The American Institute of Beamed Energy Propulsion, which is organizing ISBEP 6, recently conducted a survey among specialists on topics of interest for the conference. The top vote getter was “BEP for Interplanetary/stellar propulsion,” which has resulted in Eric Davis chairing the upcoming session on that topic. And here I’ll go on to quote program chair Andrew V. Pakhomov (UAH):

“…it encompasses any type of mission and any type of vehicles, systems, or even networks as long as they go beyond the lunar orbit and as far as energy can be supplied remotely. Essentially, we have to continue the discussion of far frontiers of advanced propulsion opened by Eugene Sänger, Sebastian von Hoerner, George Marx, Wolfgang E. Moeckel, and Bob Forward, where the challenge is always the same: scientifically sound assessment of our technical abilities and limitations.”

Backing out to the broader perspective, I would argue that the necessary infrastructure for the kind of interstellar missions that will be discussed in Scottsdale may eventually become available to us, perhaps even at the huge scales envisioned by Robert Forward. But my guess is that they’ll evolve naturally as we move into nearby space for protection (asteroid deflection), energy and resources. And it’s fascinating to speculate on futures involving the construction of large structures via nanotechnology.

Dr. Pakhomov notes that he is hoping to attract a broad range of participants, particularly students, to the Scottsdale gathering. Full information on schedule and registration can be found at the ISBEP 6 site, along with contact information. Submissions for the interstellar session are due no later than September 15.