I was startled to see the Breakthrough Propulsion Physics project make the pages of The Atlantic in its current issue. Novelist Thomas Mallon, in an essay largely devoted to solar sailing and The Planetary Society’s efforts in that direction, gives vent to some of the frustration, if not exasperation, many of us feel as we see basic research losing out to short-term missions whose purpose is by no means clear. “American politicians now mostly avoid the old conditional trope ‘If we can put a man on the moon’ — because we can’t, not anymore,” writes Mallon, who goes on to lament the passage of the BPP project and, five years later, NASA’s Institute for Advanced Concepts.

Questioning Why We Explore

In Mallon’s view, the sense of exploration is itself under attack:

Even the most spectacular unmanned successes of the American space program — from the Voyager probes of the ’70s to the Galileo and Cassini missions of the ’90s — seem to belong to a fading worldview. A desire to explore, even by mechanical proxy, is now a self-indulgence to be resisted, since the end result would only be the imperial spreading of that pollutant known as humankind. In the new view, people have made such a mess of things here that we have no right to any more of the universe, and certainly not to a “backup planet,” which some space enthusiasts have suggested as the ultimate hedge against environmental catastrophe on Earth.

This would once have struck me as a Jeremiah-like screed, but that was before I began routinely writing of these matters and hearing comments to much the same effect. The worst example of this misanthropic worldview I’ve encountered occurred at a dinner party where the subject of space exploration came up. I was defending the idea of expanding into the Solar System as a necessity in terms of acquiring the tools of asteroid deflection, at which point my host said that an incoming asteroid would do the universe a favor if it destroyed our planet, and that we shouldn’t try to stop it.

Statements like that are easy to make and seem to confer a kind of cynical sophistication on those who speak them, but of course the response is this: If you choose to commit suicide, that’s your decision, but do you really think you have the right to make it for your children and grandchildren? The answer being no, then developing at least enough smarts about space travel to reach and change the trajectory of incoming objects should be a high priority for our species. 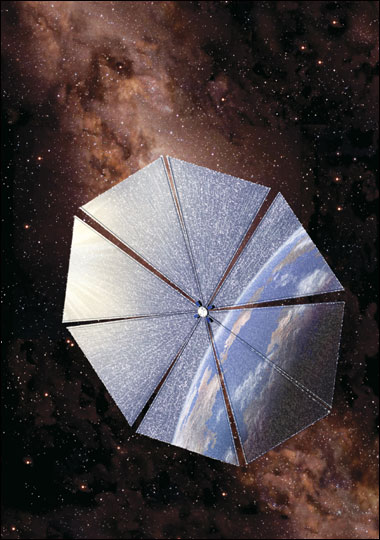 Hope for a Second Cosmos

Mallon’s point in The Atlantic, however, is not to explore our modern fatalism but to showcase solar sailing, and in particular, the experiment called Cosmos 1, a solar sail whose Volna booster failed to deliver it to orbit. A Cosmos 2 is in the cards, or so believes Louis Friedman, whose continuing labors for The Planetary Society keep him on the plane to Moscow as he tries to keep his Russian/American team intact. It’s reassuring to read that any Cosmos 2 attempt will not fly on a Volna.

Image: What might have been — Cosmos 1 in space. Credit: Rick Sternbach/The Planetary Society.

And how invigorating to see that the fundamentals of solar sailing, which many of us believe will be the workhorse of our early space infrastructure, are laid out for an audience not generally given to these matters. Thus Mallon’s conversation in Pasadena with Friedman, Bud Schurmeier (retired Voyager project manager) and astronautics veteran Viktor Kerzhanovich:

“Light has energy,” said Friedman. “That you can’t argue with.”

“Therefore it has a force,” added Friedman. “You’re using the energy of light, and the force derived thereof, to transfer momentum of light energy to your vehicle, in order to propel the spacecraft. Basically your spacecraft, your solar sail, looks like a sail, but it really is a mirror. And so it’s reflecting the light, and that reflection is where the momentum transfer occurs.” If the mirror were fixed to a wall, there would be no transfer. But in free space, with no gravity and no air pressure? You’re off to the cosmic races.

“It’s not the solar wind,” Friedman reminded me.

“Things got named wrong,” said Schurmeier. However pretty it sounds, “sailing” is really a metaphor. There is such a thing as solar wind, but as Friedman explained, “Solar wind is electrons and protons that come from the sun, and they have mass, but they go very much slower than light.”

It’s photons, not protons, that we’re talking about?

“Right,” said Friedman. “Photons have no mass, they’re all energy. You do get a force from the solar wind, but it’s about a thousand times less than the force you get from this reflection. You turn your mirror in different directions, you can point the force in any direction you want!”

Getting a Sail into Space 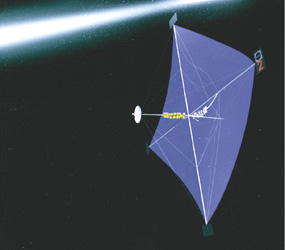 And so on. It’s been ninety years since Friedrich Tsander and Konstantin Tsiolkovsky wrote about practical solar sailing and high time we got a sail into Earth orbit to test what can and cannot be done with sunlight. NASA has cut solar sail funding just at the point when we were closing on having the technology operational, as least for test purposes, and the European Space Agency is likewise turning its attentions elsewhere. The Marshall Space Flight Center team has a second NanoSail-D ready for deployment, but who will launch it, who will pay, and when will the event occur? Best to keep The Planetary Society’s efforts in full gear, because someone has to do this.

But in matters like these, everything depends upon funding, and at the moment the money is tight, despite the efforts of Ann Druyan at Cosmos Studios, who is devoting as much personal energy into Cosmos 2 as she did with Cosmos 1. Mallon calls Cosmos 2 “a Hail Mary pass, an audacious leap,” but in reality it’s a simple first step, and a tentative one at that, in pushing solar sail technology to a higher level of readiness. The fact that it has to be done by private initiative instead of government, for the price (as Druyan notes) of “a nice New York apartment,” could actually become its salvation, but only if the right philanthropist decides to dig deep into his pockets.