We’re now up to 347 detected exoplanets around 293 stars. The latest find turns out to be intriguing on several counts. VB 10 is a red dwarf about 20 light years away in the constellation Aquila. Its newly detected planet is a gas giant with a mass six times that of Jupiter, a ‘cold Jupiter’ not so different from our own. Interestingly, although the star is considerably more massive, both planet and star should have roughly the same diameter. 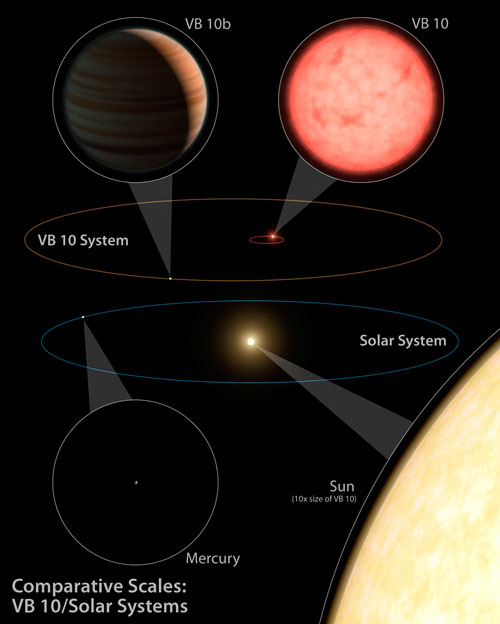 Image: This artist’s diagram compares our solar system (below) to the VB 10 star system. Astronomers successfully used the astrometry planet-hunting method for the first time to discover a gas planet, called VB 10b, around a very tiny star, VB 10. All of the bodies in this diagram are shown in circular insets at the same relative scales. Astrometry involves measuring the wobble of a star on the sky, caused by an unseen planet yanking it back and forth. Because the VB 10b planet is so big relative to its star, it really tugs the star around. The red circle seen at the center of the VB 10 system shows just how big this wobble is. Because our sun is more massive than VB 10, its planets do not cause it to wobble nearly as much. Credit: NASA/JPL-Caltech

With a mass just one-twelfth that of the Sun, VB 10 is truly a tiny star, about one-tenth the size of ours, and one that now holds the record for the smallest star known to host a planet. But VB 10b raises the eyebrows for other reasons, not the least of which is that it is found in such an intriguing orbit. Here’s Steven Pravdo (JPL), lead author of the study on this world:

“We found a Jupiter-like planet at around the same relative place as our Jupiter, only around a much smaller star. It’s possible this star also has inner rocky planets. And since more than seven out of 10 stars are small like this one, this could mean planets are more common than we thought.”

More good news, then, for the M-dwarf contingent, among which I count myself an enthusiastic member. The gas giant here actually orbits every nine months at a distance similar to Mercury’s spacing from the Sun (fifty million kilometers). Inner, rocky planets could exist in this star’s habitable zone. But despite the effects of tidal lock, there is continuing speculation that temperate conditions could exist on such worlds.

So does VB 10 actually house a solar system not so different from our own? We don’t know, but what does become apparent is that any techniques that help us find ‘cold Jupiters’ (as opposed to the ‘hot Jupiters’ so prevalent because of selection effects in our early results) will help us turn up more systems arranged something like ours.

The other noteworthy aspect of this work is that the observations, made at the Palomar Observatory near San Diego, flagged the star by means of astrometry. Unlike radial velocity studies, which look at the Doppler shifts in starlight as a star is pulled toward and then away from us by a planet, astrometry detects the tiniest of changes in the positions of stars in the sky. VB 10b becomes the first exoplanet found using astrometry, a method Pravdo calls “…optimal for finding solar-system configurations like ours that might harbor other Earths.” More in this JPL news release.