Planets Forming Around a Close Binary

Planets around binary stars continue to be a major interest here, given our fascination with nearby Alpha Centauri. Thus the recent radio interferometry images captured by the Submillimeter Array radio telescope system (Mauna Kea) come right to the top of the queue. We’re looking at a young binary system called V4046 Sagittarii, providing a glimpse of planetary system formation occurring around two stars of roughly the Sun’s mass. This system is approximately 240 light years from our own. 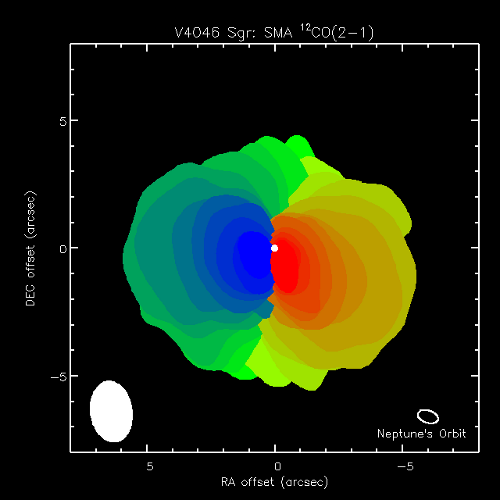 Image: Submillimeter Array image of the rotating, gaseous disk surrounding the young twin-star system V4046 Sagittarii (located at the white dot in the image). Note the size of the V4046 Sagittarii disk relative to the orbit of Neptune, shown to scale at the lower right (the filled oval at lower left represents the size of the smallest structures that could be detected in the image). The disk is tipped from our perspective, such that it appears as elliptical rather than circular. The image is color-coded according to the motion of the gas in the system, with blue representing material that is approaching and red representing material that is receding from us. The fastest-moving approaching and receding gas is detected closest to the central binary star system, as expected if the disk gas obeys Kepler’s laws of planetary motion. This disk gas likely represents the raw material out of which Pluto-like bodies, comets, and perhaps gas giant planets will form (or might already have formed) around the double star. Credit: Joel Kastner/SMA.

Carbon monoxide and hydrogen cyanide had been found in the circumstellar molecular gas cloud around V4046 Sagittarii, comprising raw materials for planet formation. The rotating disk found there was confirmed by the imagery following that earlier work, says Joel Kastner (Rochester Institute of Technology):

“It’s a case of seeing is believing. We had the first evidence for this rotating disk in radio telescope observations of V4046 Sagittarii that we made last summer. But at that point, all we had were molecular spectra, and there are different ways to interpret the spectra. Once we saw the image data from the SMA, there was no doubt that we have a rotating disk here.”

And quite an interesting disk at that: We’re dealing with two solar-mass stars with a separation of no more than five solar diameters, a much tighter fit than we see between Centauri A and B. The twin stars are young, at roughly twelve million years old, but the protoplanetary disk may be the oldest known. If that’s the case, we’re looking at the formation of Jupiter-class planets continuing long after the first few million years. What challenges that poses to planet formation theories remains to be seen.

Close binaries present unusual problems for radial velocity measurements, so we’re pushing into a new discovery zone for exoplanets with this work. Kastner notes the implications:

This work was presented today at the American Astronomical Society meeting in Pasadena and draws on earlier work reporting on the molecular gas cloud around V4046 Sagittarii. The imagery now confirms the earlier study. The paper is Kastner et al., “Molecules in the disk orbiting the twin young suns of V4046 Sgr,” Astronomy & Astrophysics 492 (2008), pp. 469-473 (abstract).