Life Beneath the Ice

Three kilometers down in the Greenland ice sheet is what I call an extreme environment. Even so, Penn State researchers have been able to bring a bacterium called Herminiimonas glaciei back to life after a dormancy of 120,000 years in these conditions. The work involved incubating the samples at 2 degrees Celsius for seven months, then at 5 degrees Celsius for a further four and a half, a patient process rewarded by the appearance of the purple-brown bacteria.

“These extremely cold environments are the best analogues of possible extraterrestrial habitats. The exceptionally low temperatures can preserve cells and nucleic acids for even millions of years. H. glaciei is one of just a handful of officially described ultra-small species and the only one so far from the Greenland ice sheet; studying these bacteria can provide insights into how cells can survive and even grow under extremely harsh conditions, such as temperatures down to -56˚C, little oxygen, low nutrients, high pressure and limited space.”

Europa, anyone? Or how about the polar caps of Mars? We can’t rule out microbes evolved from the icy conditions present in such places. And as to longevity, this new find is out-done by the eight-million year-old bacterium found beneath the surface of a glacier in Antarctica (although questions have been raised about possible contamination in that sample). The paper on the Greenland find is Loveland-Curtze et al., “Herminiimonas glaciei sp. nov., a novel ultramicrobacterium from 3042 m deep Greenland glacial ice,” International Journal of Systematic and Evolutionary Microbiology 59 (2009), pp. 1272-1277 (abstract).

A New Look at Space Elevators 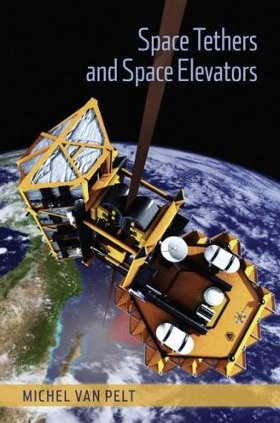 The old saying has it that if you can get to low Earth orbit (LEO), you’re halfway to any destination in the Solar System. That makes my interest in Michel van Pelt’s new book rather keen, because the space elevator described here is just the ticket for getting large payloads into space on a continuing basis, the sort of thing we’ll have to do as we build a true system-wide infrastructure for our species. Space Tethers and Space Elevators (Copernicus, 2009) gathers the thoughts of this European Space Agency analyst on the practicality and promise of a technology that seldom seems to get the press it deserves.

But as the technology evolves, we’ll be experimenting with numerous tether concepts less demanding than the elevator, ranging from generating electricity in a magnetosphere to braking and accelerating spacecraft. So-called ‘momentum exchange’ tethers may have a significant role to play as we consider alternatives to chemical rocketry for exploring near-Earth space all the way to Mars. As far as I know, this book is the first full-length popular treatment of the tether concept. More on tethers and elevators as I get into the book (have to finish Alastair Reynolds’ Revelation Space first).

A Carnival Look at Betelgeuse

UC-Berkeley astronomers have noticed that Betelgeuse has lost fifteen percent of its diameter within the last fifteen years. And as Ian O’Neill notes on Space Disco, it took all the resources of the Infrared Spatial Interferometer (ISI) on Mt. Wilson to make such a precise measurement of a star that has undergone no variation in its luminosity. Are we looking at a perfectly normal phenomenon — the star has varied in size in the past — or is the shrinkage itself an illusion, brought about by our observation of a star that is not spherical?

The latter seems reasonable, and O’Neill notes that simulations point to Betelgeuse, which is shrouded by clouds of gas and dust, as a potato-shaped object. But O’Neill’s real point is to attack the ginned up media coverage of the UC-Berkeley news release, which was perhaps triggered by a New Scientist story called Betelgeuse: The incredible shrinking star?, in which UC-Berkeley’s Charles Townes speculated “Maybe there’s some instability in the star and it’s going to collapse or at least go way down in size or blow off some material, but who knows.”

A Fox News story on a potential supernova shot to the front page of Digg. Comments O’Neill: “Everyone loves a supernova. As for the “shrinking star” reports, not so much… This may not have the makings of the next, great doomsday movie plot, but it is an example how definite conclusions (i.e. a supernova) can be made from a fairly benign, yet interesting astronomical ‘mystery.'” O’Neill’s comments are part of the most recent Carnival of Space, now available on the fine Innumerable Worlds site.