Enceladus: Riddle of the Plumes

Is there really an underground ocean on Enceladus? The Cassini spacecraft’s striking images have created a cottage industry in speculation, with spectacular glimpses of erupting plumes composed of ice and water vapor. This week, however, we get two contrasting views on what all this means. In one, a paper in Nature by a European team led by Frank Postberg (Universität Heidelberg), studies of sodium salts in dust ejected by the Enceladus plumes reveal telltale signs of a salty ocean deep below the surface.

Postberg was working with data from the Cosmic Dust Analyzer (CDA) instrument aboard Cassini, and the results imply a level of sodium chloride that may be as high as that found in Earth’s oceans. The data come from ice grains in Saturn’s E-ring, which is thought to consist largely of material from Enceladus. Thus we seem to be gathering direct evidence for the presence of the hypothesized ocean, which should be salty from long contact with the rocky core. 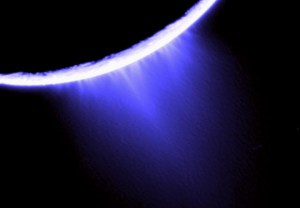 But not so fast. The same issue of Nature delivers a report from Nicholas Schneider (University of Colorado at Boulder), whose own team examined sodium emission in the plumes erupting from Enceladus. Using the 10-meter Keck 1 telescope and the 4-meter Anglo-Australian telescope, the researchers found no sign of sodium emission, a result that suggests alternative solutions to the riddle of the plumes. One possibility is the presence of deep caverns from which water evaporation is slow, or warm ice vaporising into space. “It could even,” says Schneider, “be places where the crust rubs against itself from tidal motions and the friction creates liquid water that would then evaporate into space.”

Image: Geysers near the south pole of Enceladus. Are we seeing evidence of a subsurface ocean, or are there other explanations? Credit: NASA/JPL/Space Science Institute.

Enceladus comes out of this as enigmatic as ever, the existence of its ocean still debated. If there is a reservoir of salty water on the moon, what are the mechanisms regulating the escape of sodium, and how do we account for the sodium salts of the E-ring? More to come, but for now, the CDA paper is Postberg et al., “Sodium salts in E-ring ice grains from an ocean below the surface of Enceladus,” Nature 459 (25 June 2009), pp. 1098-1101 (abstract). The Schneider paper is “No sodium in the vapour plumes of Enceladus,” in the same issue of Nature, pp. 1102-1104 (abstract).