I’m off tomorrow night to Italy, specifically to the Sixth IAA Symposium on Realistic Near-Term Advanced Scientific Space Missions. I’ll be delivering a talk at the conference and a public lecture in the town of Aosta and, assuming a robust Internet connection, I’ll also be sending along news of the conference as it unfolds. I’m looking forward particularly to catching up with Giancarlo Genta, Greg Matloff and wife C Bangs, and Claudio Maccone, and it will be great to touch base again with Les Johnson, whom I haven’t seen since we talked at Marshall Space Flight Center in 2003.

Superluminal Radio Waves and their Uses

An article in the Santa Fe New Mexican discusses the work of John Singleton, a physicist at Los Alamos National Laboratory, who has created a ‘polarization synchrotron,’ which according to the report pushes radio waves faster than the speed of light. In a paper on this work, Singleton explains that:

…though no superluminal source of electromagnetic fields can be point-like, there are no physical principles preventing extended faster-than-light sources. The coordinated motion of aggregates of subluminally-moving charged particles can give rise to macroscopic polarization currents whose distribution patterns move superluminally. Further relevant progress occurred with the theoretical prediction that extended sources that move faster than their own waves could be responsible for the extreme properties of both the electromagnetic emission from pulsars (rapidly spinning, magnetized neutron stars) and the acoustic emission by supersonic rotors and propellers.

“Pulsars are rapidly rotating neutron stars that emit radio waves in pulses, but what we don’t know is why these pulses are so bright or why they travel such long distances,” Singleton said. “What we think is these are transmitting the same way our machine does.” 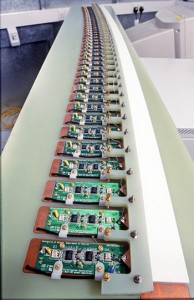 In the article, Singleton speculates on cell phones using the technology to communicate directly to satellites rather than using today’s relay tower system, and also sees applications in targeted chemotherapy, with radio waves activating anti-cancer drugs in tightly controlled areas around a tumor. The superluminal transmissions are, the scientist says, “…the light version of a sonic boom.” In other words, “When something travels faster than its own wave speed you get a very large disturbance. And these powerful signals that result, well, this would be how E.T., if he were out there, would likely try to communicate with us.”

Image: The polarization synchrotron, whose combination of radio waves and spinning magnetic field is said to force radio waves to travel superluminally. I can’t imagine how this effect could be used to transmit information, but we’ll certainly keep an eye on it. Credit: Santa Fe New Mexican.

The work comes out of a presentation by Singleton and colleague Mario Perez at the American Astronomical Society conference in Austin, Texas. The paper is Ardavan, Singleton et al., “Experimental demonstration of a new radiation mechanism: emission by an oscillating, accelerated, superluminal polarization current,” available online.

Interviewed in Crossed Genres, biochemist and author Athena Andreadis gives her take on various themes that have surfaced in fantasy and science fiction, including eugenics, radical metamorphosis (think werewolves) and the creation of life in the laboratory. It’s a wide-ranging, absorbing interview that swiftly swings into Centauri Dreams space when Athena discusses matters of genetic diversity on a generation ship to the stars. It’s an old science fiction trope, and one whose issues may be resolved not before but after launch:

In terms of long-generation starships, I think the answer to that depends on what level of technology they have when they launch. If they have ways of tinkering with germ line and somatic cells, the genetic diversity they launch with would become irrelevant. They could introduce as much diversity as they want on the way, both for children to be born and to existing crew members.

More than a few science fiction scenarios grow out of those thoughts! Be sure to read the entire interview, noting especially Athena’s answer to the question of whether or not we should go into space when we have so many problems here at home. 16th Century China made the choice of abandoning exploration in order to clean house, with results including the Opium Wars and the eventual colonization of China by the European powers [but see Doug M.’s refutation of this in the comments below]. Not one to argue against fixing pressing societal issues, Athena nonetheless sees the benefits that accrue from continuing interstellar research:

The next 40 years will not be the past 40 years. We’ve reached the breaking point and, depending on what we do, it will make us or break us as a species. As a global organism. And frankly, if we mess it up, we deserve to fail. Why should we go to the stars if we cannot take care of our own home?

But any solutions that would allow the creation of long-generation starships would also apply to maintaining Earth. So they’re not mutually exclusive, in fact they will reinforce each other, including physical adaptation. Including the possibility of living in the oceans, which would be like living in space, with just some reversals.

The case for deep space exploration can be made on several fronts, from the seemingly innate human urge to explore to the need to ensure survival — and let’s not forget the hope of finding new forms of life to study — but it’s important to keep pointing out that such research isn’t exclusionary. Benefits accrue from these studies that can be put to work here on Earth, a reminder that we can hope to improve our planet even as we study how to get off it.