One of the surprises of the Aosta conference was Joel Poncy’s presentation on a fast orbiter mission to Haumea. Poncy (Thales Alenia Space, France) and colleagues have been developing ideas for the extraordinarily difficult challenge of not just sending a probe to the outer system, but slowing it down for orbital capture. It’s one thing to do this, say, for Neptune, where a thick atmosphere can be used for aerobraking, but it’s quite another to contemplate doing the same for an airless trans-Neptunian object (TNO) like Haumea. 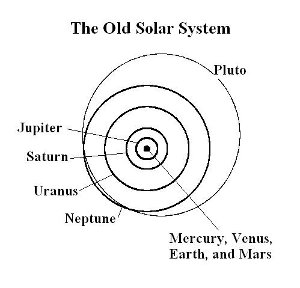 Nonetheless, there are solid reasons for thinking about such a mission. The first is purely scientific. As Poncy did, I’ll use outer planet specialist Mike Brown’s illustrations of what has happened to our Solar System in the last few decades. The first illustration shows the Solar System most of us grew up with, a system with nine planets that were more or less clearly defined, with what was assumed to be a certain amount of debris and cometary material further out.

Now, of course, we see a new Solar System. Depending on how we define planets, we can declare that we have numerous such objects in the outer system — call them ‘dwarf planets’ — along with, much further out, the enormous, spherical system known as the Oort Cloud. Think about this: The number of objects with a diameter beyond 500 kilometers has doubled in just ten years from thirty-five to more than seventy as we’ve continued our investigation of trans-Neptunian objects. It is fully assumed that within another decade or two, we’ll know of hundreds more of these objects.

Let me quote Poncy on this:

If we now recap all sizable Solar System planetary objects larger than 500 km, we get 19 objects closer than the orbit of Uranus, orbit-able after a decade or so of cruise with current technologies. Uranus itself can be flown by but not orbited for a decent travel time. We have already more than 40 objects at Uranus and beyond and this number will grow considerably by 2020. This is even starting to change the appellation ‘Outer System,’ which was previously used to name the part beyond the frost line at 4 AU, and is now sometimes used to designate the part beyond 30 AU.

Consider, too, that we once thought of the the Solar System as being enclosed in a well defined heliosphere that separated it from true interstellar space. Now we have objects like Sedna, with an aphelion (942 AU) that is well beyond the heliosphere. In moving to its perihelion at 76 AU, Sedna moves from interstellar space into the heliosphere and then gradually works its way back out again. The new Solar System is packed with objects that defy all the definitions we once brought to the term.

As for Haumea itself (once known as 2003EL61), we’re looking at a most unusual little world. You can study its light-curve to determine that it’s spinning quickly, about once every 3.9 hours. More unusually, rather than being spherical, it appears to be a flattened ellipsoid with its largest axis in the range of 2000 kilometers. One of the thirty largest objects in the Solar System, it is orbited by two moons, the largest — Hi’iaka — being rather large in itself, with a diameter estimated to be 300 kilometers. 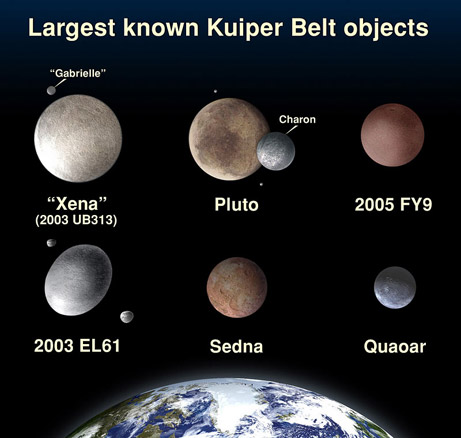 The current thinking is that Haumea is the result of a major collision, one that produced the entire system of TNO and two moons. Adding to the interest is that Haumea is quite reflective, its surface covered with crystalline water ice. This could be interpreted as evidence for cryovolcanism (think Triton), and brings home the usefulness of an orbiter. After all, a flyby mission is not going to be able to track transient phenomena over time. Moreover, the orbital dynamics of the system, including the interactions of its moons and the tidal effects of Haumea itself, are complex and will need long study to understand.

Can we get to this unusual object, which is now close to aphelion at 51 AU from the Sun? It’s certainly within range of our probes, but orbiting it would not be easy. We’ll look at the why and how of such a mission tomorrow.

Previous post: Back from Italy, We Turn to Nanotech