Yesterday’s look at a fast orbiter mission to Haumea raises useful questions. The mission, developed conceptually by Thales Alenia Space and presented at Aosta by Joel Poncy, is particularly demanding because this outer system object has no atmosphere. You can make the case for a Neptune orbiter with associated study of Triton, as several readers have already done, but if you want to orbit Haumea, no aerobraking is possible to ease orbital insertion.

The Haumea mission, in other words, deliberately pushes the state of the art in both propulsion and power generation. Poncy noted in his talk at the Hotel Europe that his team had adapted an in-house software model to optimize the propulsion possibilities. The team considered only electric or magneto-plasma technologies (for the latter, think VASIMR — Variable Specific Impulse Magnetoplasma Rocket). They assume a direct trajectory to Haumea with arrival around 2035, when the object is at 49 AU, and they weigh the benefits of a gravity assist by Jupiter to help shorten the journey.

Image: The orbits of Hi`iaka (outer satellite) and Namaka (inner satellite). Namaka’s orbit is nearly edge on as viewed from Earth. Every nine days Namaka passes directly in front of or behind Haumea as seen from Earth. Credit: University of Hawaii/D. Ragozzine.

Taking the hardware to its limits, Poncy and colleagues come up with what looks to be a feasible mission concept, one with a specific impulse of 10000 seconds, a launch mass of 3000 kilograms and a flight time of about 21 years. Says Poncy:

This set of parameters corresponds to what should be achievable in a near future, provided that VASIMR and beta-voltaic technologies are implemented into respectively propulsion and power units by adapting their design and operating point to this class of spacecraft.

A lot is in play here. For one thing, VASIMR is more promise than reality at these levels — will it perform as advertised? For another, Poncy himself notes the problem with generating the power needed to fly this mission. Here’s his thought on that:

…the current technologies would fall short of the needs. The beta-voltaic technology looks promising, as values up to 24W/kg might be within reach in the coming years providing that the packaging design and the battery assembly are adapted to the production of several kW… If we want to go beneath 20 years [flight time], then the industry and the agencies will have either to undertake even more ambitious developments for the power generation, so as to reach about 50W/kg in terms of power density, or find new disruptive technologies. 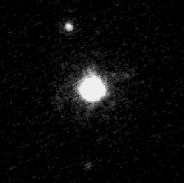 Yesterday I talked about the scientific value of a Haumea mission, but the second motivation for going to this distant object is to use the mission as a technology driver. Poncy was exactly right when he told the audience at Aosta that if we’re going to get serious about Solar System colonization and, ultimately, interstellar travel, we need to develop the near-term technology to reach and orbit objects in the outer system with less than ten to twenty years of cruise. And don’t forget, these trans-Neptunian objects (TNOs) are rich in volatiles and organics, interesting places for future robotic or even human outposts.

Moreover, we’re intent on exploring the moons of the gas giants, which is going to demand developing next generations orbiters, landers and deep-drilling capabilities. A fast journey to an object like Haumea thus becomes a way to extend our science to planetary objects within 100 AU that can at the same time increase our capabilities for reaching Jupiter or Saturn space with the kind of heavy payloads we want to see in operation there. Poncy sees Haumea as a targeting goal for developing the next tools we need as we expand our studies of closer worlds like Europa and Titan.

The paper is Poncy et al., “A Preliminary Assessment of an Orbiter in the Haumean System: How Quickly Can a Planetary Orbiter Reach Such a Distant Target?” It’s in Proceedings of the Sixth IAA Symposium on Realistic Near-Term Advanced Scientific Space Missions, and should therefore pop up in the near future in Acta Astronautica.