Habitable Exomoons Should Be Detectable

The hunt for exomoons — satellites of planets around other stars — gets more interesting all the time. This morning I received a note from David Kipping (University College London), who has been studying methods for finding such objects. Kipping and colleagues have a paper soon to be published by Monthly Notices of the Royal Astronomical Society that discusses how to detect habitable exomoons using Kepler-class instrumentation. And it turns out that finding such worlds is well within our present capabilities. 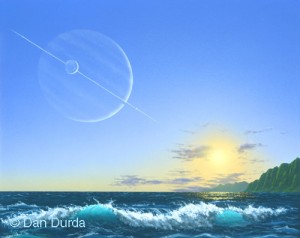 A bit of background: Kipping’s method is to analyze two useful sets of signals. Transit timing variations (TTV) are variations in the time it takes a planet to transit its star. Kipping and team acquire these data and then weave the TTV information together with what is called transit duration variation (TDV). The latter is detectable because as the planet and its moon orbit their common center of mass, velocity changes can be observed over time. Put TTV and TDV together and exomoon detections become possible.

Image: A tropical moon around a gas giant in an imagined solar system. We should soon begin to learn whether such worlds are common. Credit: Dan Durda (SwRI).

The new paper extends exomoon studies to habitable zones, and its findings are exciting. Assuming the kind of photometry available to the Kepler mission (and, in short order, ground-based telescopes), exomoons in the habitable zone down to one-fifth of an Earth mass should be within range of our instruments. Indeed, habitable exomoons around M, K and lighter G-class stars up to 100-200 parsecs away should be detectable. Kipping notes that up to 25,000 stars within Kepler’s field of view could be surveyed for exomoons of up to one Earth mass, while an extended survey of the galactic plane could extend the number to two million.

The most likely planet for an exomoon detection? A world something like Saturn, as Dr. Kipping explained in his email message:

…we find that low-density planets, like Saturn, provide a much better chance of detecting an exomoon, as opposed to say a Jupiter-like planet. This is because the transit depth increases with planetary radius, allowing for a more precise transit time measurement. In contrast, a low-mass planet allows for large wobbles in the orbital motion and therefore a large exomoon signature.

An additional finding is that we should be able to find lower-mass exomoons around M-dwarfs because their habitable zones are much closer to the star, allowing a larger number of transits for the observing time available. Given that these studies show a sensitivity down to 0.2 Earth masses, it’s also interesting to see in the paper that 0.3 Earth masses is the minimum habitable mass for a planet as calculated by earlier theorists.

How common are Earth-like exomoons? We don’t know, but note this (from the paper):

Our results suggest it is easier to detect an Earth-like exoplanet than an Earth-like exomoon around a gas giant. However, we have no statistics to draw upon to estimate which of these scenarios is more common. If a roughly equal number of both are discovered, it would indicate that the latter is more common due to the detection bias.

And that’s where we are now, waiting for the tsunami of data that Kepler and later space-based missions should provide us. The prospect of finding habitable moons around distant planets boggles the mind, but Kipping makes a strong case for our ability to make such a detection within a few short years. In any case, equipment like Kepler should be able to find such worlds if they exist. All-sky surveys focusing on M-dwarf stars would be ideally suited for continuing the hunt.

The paper is Kipping et al., “On the detectability of habitable exomoons with Kepler-class photometry,” accepted by Monthly Notices of the Royal Astronomical Society and available online.