If you’ll examine the cover of Claudio Maccone’s new book carefully, you’ll see an interesting object at the lower right. It’s a spacecraft with two deployed antennae connected by a tether. The book is Maccone’s Deep Space Flight and Communications, whose subtitle — ‘Exploiting the Sun as a Gravitational Lens’ — tells us much about the author’s view of how early interstellar missions should proceed. And Maccone devoted a session at the recent conference in Aosta to these matters, making the case for taking advantage of this natural phenomenon. 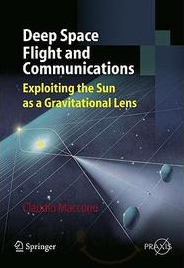 We’ve looked at the Sun’s gravitational lens, and the FOCAL mission Maccone champions to exploit it, many times here on Centauri Dreams. But for newcomers, gravitational focusing has been an active astronomical tool since 1978, when a ‘twin’ image of a quasar was found by the British astronomer Dennis Walsh. The gravitational field of a galaxy between the Earth and the quasar had bent the light from the more distant object, yielding the double image. And it was back in 1979 that Von Eshleman studied the Sun’s own gravitational focus at 550 AU, pondering how we might send a spacecraft there to study its effects.

The Sun at that distance becomes a huge celestial magnifier, and Dr. Maccone has been arguing that before we send a mission to any star, we should send a probe to this much closer target in the exactly opposite direction. Diffracting effects from the Sun’s corona may distort the image at the minimum 550 AU distance, so we may have to go farther, but we’re still talking about getting a spacecraft to well less than 1000 AU to begin making its observations. In fact, the further the probe travels, the less distortion from the solar corona, and the focal line extends to infinity.

A Tethered Solution to the Antenna Problem

Below is an enlarged image of the FOCAL spacecraft with tether clearly visible. The key point is that sending such a mission would avail us little if we couldn’t take advantage of its trajectory to get an adequate image of the focused light from the other side of the Sun. Maccone told the assembled scientists in Aosta that working with a gravitationally-lensed image would involve more than a single antenna, but noted that tether technology could be used to solve the problem. Hence the twin antennae of the image. 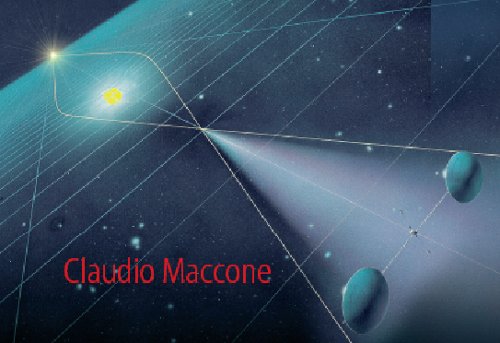 An email from Dr. Maccone this afternoon clarifies the idea of using what radio astronomers call ‘aperture synthesis’:

While the spacecraft is moving away from the Sun, the tether is gradually released, and so two Archimedean SPIRALS are covered by the two antennae, yielding a full radio picture of the radio source, with a FIELD of view MUCH LARGER than the one provided by a single antenna.

Tethers have numerous space applications but they’re tricky to test on the ground because we can’t simulate zero gravity conditions sufficiently to study their characteristics. That has made for numerous space missions using tethers, dating all the way back to the latter days of the Gemini program. But note this: Maccone is talking about tethers of no more than several kilometers in length. The largest tether ever deployed successfully was on the YES-2 experiment conducted by the European Space Agency in 2007. YES-2 deployed a 31.7 kilometer tether in space, and robust work continues on the tether concept.

Maccone is convinced that a tethered system of antennae can resolve the daunting imaging issues posed by a probe at 550 AU, with stunning capabilities at magnifying the object being imaged. Thus the possibility of getting high quality images of any planets of interest in a target solar system, down to small details on the planetary surface. It’s worth remembering, too, that the distance a FOCAL probe would need to reach to study the Centauri stars is 278 times smaller than the actual distance of those stars. And the view that is potentially achievable from that distance far surpasses anything available through other kinds of observatories.

An Idea with a History

Deep Space Flight and Communications (Springer, 2009) represents Maccone’s current thinking on FOCAL as it has evolved over the years. Be aware that he was discussing the idea as far back as a 1992 conference in Turin, and in 1993 submitted a formal proposal to the European Space Agency to fund the mission design. Many things have changed in the time since, all summarized in the new book. As he did in the book, Maccone developed his ideas on the Karhunen Loeve Transform (KLT) and its uses for signal processing and analysis at the Aosta conference, showing how the KLT becomes a tool for improving the signal-to-noise ratio in SETI work as well as for communications with a fast-moving FOCAL probe. 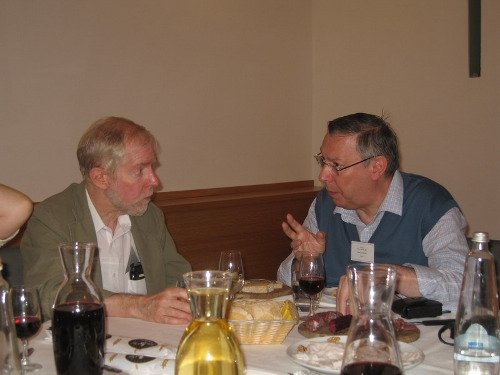 Image: Claudio Maccone (right) explains the uses of the Karhunen Loeve Transform (KLT) in signal processing to me at a fine lunch we enjoyed in the Italian Alps (note the cheese plate that sits between us — fabulous!). This photo was snapped by Roman Kezerashvili (City University of New York).

It’s interesting to see the tether concept being applied here. And I also want to note that Michel van Pelt’s new book Space Tethers and Space Elevators (Copernicus, 2009) goes into considerable detail on the history of tether missions in space — the number is far higher than I had realized. I’ll have more to say about tethers and their uses once I’ve finished the book, but it’s clear that refining the tether concept is going to take time, and that its potential uses are so beneficial as to make it a high priority.