Tau Zero in the Press

Edinburgh-based journalist Ian Brown offers up an overview of interstellar issues in Scotland’s Sunday Herald. The core of the story is an interview Brown conducted with Tau Zero founder Marc Millis, who as Brown notes was formerly the manager of NASA’s Breakthrough Propulsion Physics project. The Tau Zero Foundation grows out of that work (though it retains no NASA connection), and it’s good to see us getting publicity in a popular science story that captures TZF’s imaginative spirit while avoiding sensationalism. Brown calls us “a grass-roots network of physicists, mathematicians, engineers and science journalists,” an accurate description.

Here’s a snippet quoting Millis on the nature of interstellar striving:

“How much we accomplish is, of course, tied to the resources we acquire. The focus will be on making incremental progress rather than big projects.”

As a physicist, he knows the sheer immensity of the challenge. Many scientists believe we will never reach the stars. With interstellar propulsion we’re not limited by our own technological abilities but also by fundamental laws of physics such as the speed of light. Does Millis really believe we can do it?

“Since the survival of humanity is at stake, I think it would be irresponsible not to try,” he says.

“Just by showing humanity how hard it is to escape our precarious existence on this one small planet, we hope to cause the ripple effect of making people behave more peacefully and environmentally responsibly. If these efforts do lead to practical interstellar flight, we will have ensured humanity’s survival.”

Right now we’re talking about the Moon and Mars, spurred on by the recent Apollo 11 anniversary, and by Buzz Aldrin’s commitment to push on to the Red Planet. But the discovery of an Earth-like world around another star will surely capture the public imagination, as it did briefly when Gliese 581 c was (evidently erroneously) thought to be habitable. A blue and green world around a Sun-like star will pump up that interest again, and to greater effect. How to harness the enthusiasm? Imagination coupled with scientific rigor is, Millis believes, the key to progress and a central tenet of Tau Zero.

The Internet is the auto-didact’s dream, a chance to bone up on subjects grown musty with disuse or to master entirely new fields. How energizing, then, to see that Microsoft’s Bill Gates is putting classic physics lectures by Richard Feynman onto the Net, using part of his abundant fortune to acquire the rights and develop interactive software to show off the material to good effect. From a New York Times story discussing the site:

When it is completed it will offer searchable transcripts from the lectures as well as commentary from well-known physicists. The site also offers individual viewers the ability to annotate and take notes. Currently, the first lecture has an “extras” features on the right side of the Web page which includes interactive animations and other components. 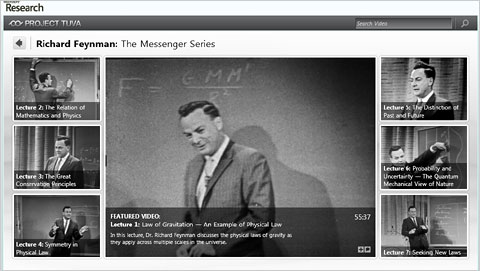 Feynman had a remarkable gift for making a subject entertaining while not giving up an inch on the rigor necessary to understand it. That’s no small feat, and a rarity on most campuses today. Being accessible doesn’t change the fact that the intellectual bar needs to be set high enough so as not to over-simplify. I’ve listened to a number of Feynman lectures (made available through Audible.com) on my evening walks and continue to learn from the man despite the sometimes murky audio. The question now is, what other great lecturers can we likewise bring to the public?

Those of us concerned with data preservation note with alarm that all that good content we’ve locked up on CDs and DVDs has a vanishingly short lifetime. But a Utah firm called Millenniata is, according to the Long Now Blog, about to begin offering DVDs that can protect their data for a thousand years. Capable of being read by a standard DVD drive, the disks are made of proprietary materials the company claims will survive the millennium intact.

Long Now has the necessary follow-up point: It’s one thing to have an imperishable disk, but how do we know that, after a thousand years, the technology to read it will be readily available? Comments the site: “A Millennial DVD player would be a vast departure from the current crop of devices that barely last beyond their one-year warranties.” True, but the short-term is also significant for journalists, and I notice the Millenniata site (www.millenniata.com) has been down since I read this story.