I’m pushed for time this morning but do want to catch up with Cassini news, in particular the recent findings from Enceladus. The plumes of water vapor and ice particles erupting from the moon continue to capture the imagination. Cassini’s Ion and Neutral Mass Spectrometer was used during Enceladus flybys in July and October of 2008, with results just released in Nature. Out of all this we get this interesting find, as discussed by Hunter Waite (SwRI), who is lead scientist on the instrument involved:

“When Cassini flew through the plume erupting from Enceladus on October 8 of last year, our spectrometer was able to sniff out many complex chemicals, including organic ones, in the vapor and icy particles. One of the chemicals definitively identified was ammonia.”

William McKinnon (Washington University, St. Louis) calls ammonia “sort of a holy grail for icy volcanism,” noting that this is our first unambiguous detection of ammonia on an icy satellite of a giant planet. Finding it is intriguing because the presence of ammonia can keep water in liquid form at lower temperatures than we might expect. 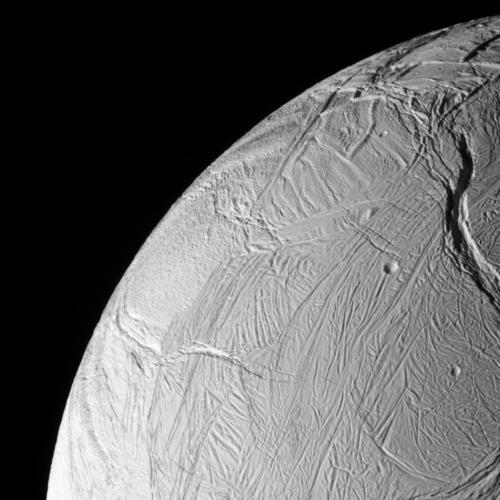 Image: The Cassini spacecraft acquired this view of Enceladus just after the spacecraft passed within 25 kilometers (15 miles) of the surface on Oct. 9, 2008. Remarkably, only a handful of craters are visible in this view, indicating the relatively young age of this surface. Credit: NASA/JPL/Space Science Institute.

This JPL news release talks about ammonia as a natural antifreeze, and notes that with the right amount of ammonia, water can exist in a liquid state at temperatures as low as 176 Kelvin (-143 degrees Fahrenheit). Waite again:

“Given that temperatures in excess of 180 Kelvin (-136 degrees Fahrenheit) have been measured near the fractures on Enceladus where the jets emanate, we think we have an excellent argument for a liquid water interior.”

Cassini has already racked up five Enceladus flybys, with two more scheduled for November and another two in the spring of 2010. We know we have organics and a strong possibility of liquid water within the Saturnian moon. The amount of water involved is still unknown, but potentially habitable environments are still in play.