It doesn’t take much observation to realize that the early Solar System was a violent place. Mercury seems stripped of its outer crust, doubtless the result of a massive impact, while Uranus was knocked to one side at some point in its history, aligning its spin axis with the plane of the ecliptic. Venus was hit so violently that it rotates clockwise as seen from above, opposite to the other planets. At least, a collision is one of several theories that may explain Venus’ retrograde rotation, and it’s more than plausible. 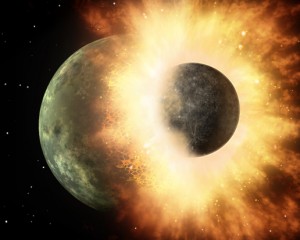 100 light years from Earth is a place that reminds us of the impact that produced Earth’s own moon billions of years ago. HD 172555 is a young star in the southern constellation Pavo (the Peacock), its twelve-million year old system in its infancy. Spectral analysis from the Spitzer Space Telescope shows clear evidence of a collision much like that between the Earth and that early, Mars-sized object that once struck it.

Image: This artist’s concept shows a celestial body about the size of our moon slamming at great speed into a body the size of Mercury. NASA’s Spitzer Space Telescope found evidence that a high-speed collision of this sort occurred a few thousand years ago around a young star, called HD 172555, still in the early stages of planet formation. The star is about 100 light-years from Earth. Credit: NASA/JPL-Caltech.

The evidence? Amorphous silica in great quantity, common on Earth in obsidian rocks and tektites — the latter are evidently formed by the impact of meteorites on Earth’s surface, while the former is found around volcanoes. Silicon monoxide gas is also plentiful, the result of vaporizing rock, and all of this exists amidst the kind of rocky rubble you would expect from a major collision, including two populations of dust grains. From the paper:

The most likely cause of the unusual mineralogy is a hypervelocity (> 10 km sec-1) impact between two rocky planetesimals, similar to the ones which created the Moon, melted and differentiated Vesta, and stripped the surface crustal material off of Mercury’s surface in the Solar System, with the latter scenario being the most understood and likely. We hypothesize that the large, blackbody-like dust grains are the macroscopic fragments left over from the hypervelocity collision, while the small grains are the material recondensed (and recondensing) from the melt and SiO vapor created by the impact.

A slower-paced collision probably wouldn’t have left the debris of melted and vaporized rock found here, adding weight to the hypothesis that this was a high-speed event, one that destroyed the smaller body. The objects in question had a combined mass more than twice that of our Moon. Will the outcome be a small planet with a large moon? Geoff Bryden (JPL) is a co-author of the upcoming paper on this work:

“The collision that formed our moon would have been tremendous, enough to melt the surface of Earth. Debris from the collision most likely settled into a disk around Earth that eventually coalesced to make the moon. This is about the same scale of impact we’re seeing with Spitzer — we don’t know if a moon will form or not, but we know a large rocky body’s surface was red hot, warped and melted.”

Previous post: Titan: A ‘Fishing License’ to Broaden the Hunt for Life