A conference like the recent on in Aosta offers plenty of opportunity to listen in on fascinating conversations, one of which had to do with what would happen if we found a brown dwarf closer to the Earth than the Centauri stars. The general consensus was that such a find would be a powerful stimulus to the public imagination and would probably result in renewed interest in getting to and exploring such a place. A boon, in short, for all our interstellar efforts, an awakening to a new set of possibilities.

But if there were a brown dwarf that close, wouldn’t we have other signs of it? One figure I heard mentioned at Aosta was three light years. Here I have to do some checking, because I don’t recall who dropped that figure or what paper he was referring to, but the upshot was that someone has argued that even a small brown dwarf closer to the Sun than three light years would leave an unmistakable signature in the orbits of our Solar System’s planets. I’ll see if I can track down the original reference (see note below). In any case, we didn’t have any astronomers in our number at Aosta to check the figure against.

A brown dwarf out there waiting to be discovered may not be unknown for long. In fact, we may well be no more than a few years away from finding it. The Wide-field Infrared Survey Explorer (WISE) mission is set for a November 1 launch from Vandenberg Air Force Base and should be able to put the matter to rest. Among the many activities of this observatory will be to find cold, dim stars. WISE should track down about a thousand brown dwarfs, among them those closest to our Solar System. That’s quite an exciting thought, as Peter Eisenhardt (JPL) has opined:

“We’ve been learning that brown dwarfs may have planets, so it’s possible we’ll find the closest planetary systems. We should also find many hundreds of brown dwarfs colder than 480 degrees Celsius (900 degrees Fahrenheit), a group that as of now has only nine known members.” 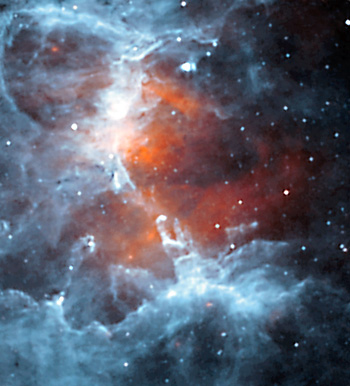 That figure of nine may be off by now, as Eisenhardt made this comment back in early June. But whatever the number, the infrared detectors on WISE are going to revise our understanding of the nearby brown dwarf population. Unlike the Spitzer Space Telescope and ESA’s Herschel Space Observatory, WISE will survey the entire sky in an effort to build target lists for current and future observatories like the James Webb Space Telescope. Bear in mind, as noted in this news release, that right now we’re still using the catalog produced by the Infrared Astronomical Satellite (IRAS), a fine set of data but drawn from a mission that flew in 1983.

Image: An infrared image of M16, the Eagle Nebula, taken by the ESA/ISO satellite. The false-color image was constructed from a 7.7 micron infrared exposure (shown as blue), and a 14.5 micron infrared exposure (shown as red). This nebula is the site of active star formation in the Milky Way Galaxy. WISE will observe the region in similar wavelengths of light to see the dust that often enshrouds star forming regions. Credit: European Space Agency.

The actual WISE mission is relatively short. The full-sky mapping will take six months (after a one-month checkout of the system), to be followed by a second, probably partial scan that will depend upon the health of the spacecraft’s hydrogen coolant, necessary to cool the infrared detectors. I don’t want to underplay WISE’s role in identifying both near-Earth objects and main belt asteroids, either, nor its ability to find more distant planetary systems in formation. This is going to be one significant mission.

Ponder for a moment where we are, a point in history where we’re about to answer some questions that have preoccupied scientists for decades. Does Alpha Centauri have planets around either of its main stars? Debra Fischer or Michel Mayor’s Geneva team, working separately, may well have an answer within a few short years (and, perhaps, even months). Are there other terrestrial worlds out there, and in what number? Both Kepler and COROT are sending us data that will help us make a preliminary call, again within just a few years. And now WISE, which may soon be able to tell us whether there is indeed a brown dwarf closer than Centauri. Has there ever been a time of astronomical discovery more packed with excitement than this one?

A Quick Administrative Note: I’m unexpectedly in a situation where I’m having to write these entries without a working Internet connection. I then have to shoot the entry up to the site the next time I’m in my office, making Net time difficult and keeping me away from many resources. If you happen to know the reference re the three light year limit on brown dwarfs, please let me know. I’m not quite sure when things are going to get back to normal, so posting may be a bit erratic here, at least for a while, and when I can post, it will probably be in the afternoon rather than the morning.