Conservation of energy means we never really get something for nothing. Nonetheless, the idea of propellantless propulsion is profoundly important for our future in space. A solar sail uses momentum from solar photons to get its boost, letting the Sun serve as the energy source so we don’t have to carry heavy fuel tanks and can maximize payload. So propellantless propulsion really means finding sources outside the spacecraft itself to do the work.

Recently I’ve finished Michel Van Pelt’s book Space Tethers and Space Elevators (Copernicus/Praxis, 2009), a treatment of a technology we seldom consider in these pages because it’s more practical in terms of near-Earth solutions. But Van Pelt surveys tethers — and the space elevator idea, which is built around what could be considered a giant tether — so comprehensively with regard to the implications of leaving the propellant behind that his book is a must read for those of us interested in deep space development. After all, building a space-based infrastructure will demand cheap access to the outer system, and it turns out tethers have interplanetary possibilities. 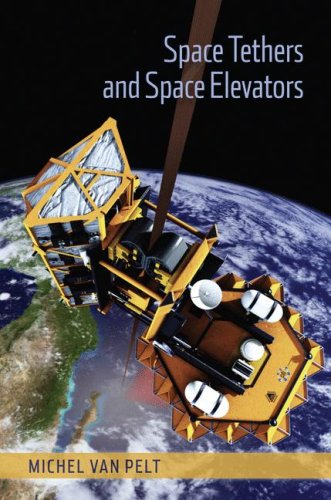 Consider the principles of momentum exchange tether systems of the kind known as ‘bolos.’ Here we’re talking about a rotating system that could be used to transfer spacecraft to higher orbits. A 100 kilometer cable in an elliptical orbit can be set to spinning vertically like a sling. Imagine it with a ballast mass on one end and a spacecraft catching and docking device on the other. The center of mass (and thus the center of rotation) will lie close to the ballast mass. Timing is all — the tether’s rotation can be timed so that when the bolo reaches its perigee, the tether is vertical and swinging backward, capable of matching the velocity of a slower moving satellite.

As the catching device swings past, the payload spacecraft can be hooked to its docking clamp. At the other side of the rotation, the docked spacecraft will now be at maximum altitude, and can be released at a higher velocity. We’ve given our spacecraft a cheap ride to a new orbit. Now imagine a larger system of this kind, as Van Pelt does:

A series of bolo tethers, each tether passing a spacecraft onto the next, could be used to achieve even larger orbit changes than a single system. For example, one tether system could catch a spacecraft from a very low orbit and swing it into a somewhat higher orbit. Another bolo picks it up from there and puts the satellite into a geosynchronous transfer orbit (GTO). A third tether catches the load again and imparts sufficient velocity to it so that it reaches escape velocity. A satellite initially orbiting just above the atmosphere could thus be slung all the way into an interplanetary orbit around the Sun, and all this without using any rocket propulsion and propellant…

Reverse the process and you can catch a spacecraft at the top of the tether rotation and release it into a lower orbit. We can imagine, then, a system that brings interplanetary missions returning to Earth into a series of orbits around the Earth that culminate in a reentry and landing that use no propellant at all. All those kilograms of fuel that would otherwise have had to make the interplanetary journey so as to be available for return are thus no longer needed, and once again we’ve flown with a much larger payload.

A ‘Rotavator’ in Lunar Orbit

This is absorbing stuff, and Van Pelt goes on to discuss Hans Moravec’s idea of a lunar ‘skyhook’ or ‘rotovator, a notion that, in turn, draws on John McCarthy’s work in the 1950s.’ Here we have two long tether arms in rotation and a massive central facility. The tethers would have the same length as the orbital altitude of the central unit, meaning that as the system rotates, their tips would periodically reach the surface of the Moon. Now this is important: The rotovator would rotate in the same direction as its orbit, and at a rate so that the velocity of each tether’s tip would equal the orbital velocity of the system’s center of mass. That means that when the tips reach the lunar surface, their velocity relative to the Moon would be zero.

We’ve built a system — call it a ‘lunavator’ — that can place an object on the surface or pick up something that needs to get into space. What a scenario. Here’s how Van Pelt describes it, noting that people on the surface would not see it as a rotating system at all:

To them it will look like a long cable reaching straight down vertically from the sky, then retreating back up exactly the same way. Depending on the tether length and the rotation speed (the combination always needs to be selected so that the tip speed at the lunar surface is zero), lunavators can be made to periodically touch down at the same single spot, at several fixed spots or at any number of varying locations every orbit. However, a rotovator that makes multiple rotations per orbit could service more than one lunar station. We may also use the tether as a kind of helicopter that picks up a payload at one site and then, after one or multiple rotations, drops it at another surface location without releasing it into space.

Tuning Up (and Reboosting) the Assembly

Now with a system like this, you have to assume that the amount of time available to pick up payloads or deposit them on the lunar surface would be short, but additional tether deployed from reels at the tether tips could lessen that problem. Van Pelt figures the unreeling tether mechanism could lengthen the time the end of the tether spends on the surface to several minutes, a more practical solution. It’s clear in this system that the central tether facility will have to be quite massive to prevent individual payloads from stealing too much momentum from the rotating tether system.

How to prevent orbital decay is one of many problems Van Pelt addresses in this volume — he goes on in the chapter I’m dealing with here to discuss the Momentum-eXchange/Electrodynamic-Reboost (MXER) tether system invented in the 1980s by Robert Hoyt of Tethers Unlimited. Here, a tether system in orbit around the Earth replenishes its transferred orbital energy by using solar arrays, running electrical energy through a metal wire in the tether. The Lorentz force caused by the interaction of the electric tether’s magnetic field with the Earth’s magnetic field then provides a steady push which can be used to propel the entire tether system back up to a higher orbit.

Image (click for a larger image at the Tethers Unlimited site): Momentum-Exchange/Electrodynamic-Reboost (MXER) tether systems can provide propellantless propulsion for a wide range of missions, including: orbital maneuvering and stationkeeping within Low Earth Orbit (LEO); orbital transfer of payloads from LEO to GEO, the Moon, and Mars; and eventually even Earth-to-Orbit (ETO) launch assist. By eliminating the need for propellant for in-space propulsion, MXER tethers can enable payloads to be launched on much smaller launch vehicles, resulting in order-of-magnitude reductions in launch costs. In order for MXER tethers to achieve their potential in real-world application, several key technologies must be developed and demonstrated, including space-survivable tethers incorporating both high-strength and conducting materials, technologies for rendezvous with and grappling of payloads, and techniques for predicting and controlling tether rotation and dynamics. Credit: Tethers Unlimited.

Who knew so many tether experiments had already been performed as are revealed in this book, going back to the days of the Gemini program? This is enlightening reading, and I’m glad to see a book focused on tethers (and in one chapter, on the space elevator concept) coming onto the popular science market. Van Pelt does a fine job acquainting us with the history and principles of tether systems and their possible uses in making near-Earth and interplanetary operations far cheaper than they are today. We may also find them useful for creating artificial gravity on long space missions and, interestingly, sweeping away dangerous charged particles around a spacecraft.

Credibility is a key to getting tether systems accepted as a viable technology, but it’s disheartening to see that they do not factor into the current planning of NASA, ESA or any other space agencies. “It will require considerable advocating, publicizing, convincing and lobbying,” writes Van Pelt, “to keep development going, and that may turn out to be even harder than meeting the technical challenges.” That’s a sentiment that scientists on numerous projects, from solar sails to nuclear propulsion, will understand.

Next post: ﻿Earth: Crash Course in Building a World