It’s easy to cite science fiction technologies that made their way into real life, starting with, say, submarines and the Jules Verne connection, and pushing on into air travel and, eventually, a spaceship to the Moon. It’s also easy to find numerous examples of science fiction being blindsided by technologies no one really predicted. I’ve read “A Logic Named Joe,” but other than Murray Leinster’s prescient 1946 tale, did anyone really predict the advent of computers small enough to fit on your desktop, or mobile devices that connect us to a worldwide network for communications and data transfer?

This is where I think some science fiction enthusiasts make a mistake in trying to sell their genre as a predictive force. Sure, the examples are there, and we have visionaries like Arthur Clarke who, in addition to crafting spectacular novels of the future, managed to introduce communications satellites into the pages of a popular magazine (Wireless World) before anyone had really examined the idea. But by and large, science fiction’s clout doesn’t come so much from prediction as much as from the ability to try out new ideas by remodeling the world so as to accommodate them. 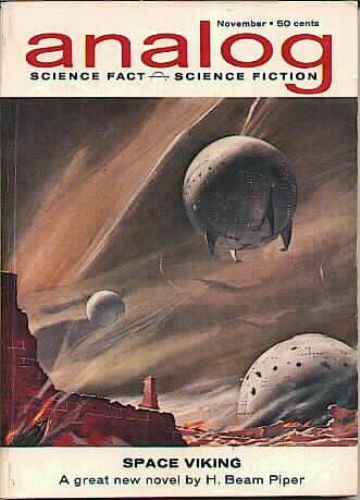 I collect old science fiction magazines and sometimes look at these rows of pulp and digest-sized volumes as containing dry runs on the future we’re moving into now. Their authors weren’t really making predictions as much as asking what would happen when a new idea was introduced, or a present-day trend was taken to its logical conclusion. That makes SF a golden way to explore the present dilemmas we all face as we try to build the best future we can muster. Peter Garretson talked about this recently in an interview with the Indian science fiction magazine Kalkion, from which this excerpt:

Of course there are degrees of imaginative vision vs technical vision, but the latter feeds the former. One can imagine and say, “What if we had a method of communcating remotely with just a small device in our hands.” That vision of a fulfilled need encourages others to think through how it might actually be done.

Image: The cover of Analog from November, 1962, with artwork by John Schoenherr. How many minds did such covers turn to science and eventual careers in fields like astronomy or physics?

Many forays into fictional futures, then, can give us alternative ways to make a new concept real. We can try on those futures by reading stories that make them come alive, seeing what effects these changes would have on society. And we can do more. By placing futuristic concepts in a tangible, fictional context, we can encourage their growth and dissemination.

The same is happening today with interstellar travel. It starts as an imaginative SF question, “How would our horizons be different if we had an interstellar drive.” Then it gets taken up by a amateur society, then NASA (http://www.grc.nasa.gov/WWW/bpp/). Now there are are annual conferences (http://www.ias-spes.org/SPESIF.html) on the subject, dedicated organizations (https://centauri-dreams.org/?page_id=9) and even an academic physics textbook on potentially promising avenues (http://www.aiaa.org/content.cfm?pageid=360&id=1743). I think it is always valuable for SF authors to say (paraphrasing Joel Barker), “What is impossible today, but if it could be changed, would change everything” for the frontiers of humanity or technology. That in turn informs us both about the widened frontiers, and the dangers and new problems we might encounter. And that, in turn, creates new and interesting technical challenges, and informs enlightened policy.

How satisfying to see the Tau Zero Foundation placed in a context that builds from amateur rocketry through the modern space age to NASA’s Breakthrough Propulsion Physics project, and now on to the Frontiers of Propulsion Science volume assembled by TZF founder Marc Millis and physicist and visionary Eric Davis. I’m not familiar with Joel Barker, but I like the idea of taking what is impossible today and asking the ‘what if’ question, which propels us to study alternatives and shapes what we do next.

A Vision Realized in Fiction

Garretson is a futurist and strategic thinker whose background includes service in the US Air Force as Chief of Future Science and Technology Exploration. The reason Kalkion snared him for this interview is that he is in India as a visiting fellow at the Indian Institute for Defence Studies and Analysis (IDSA) under the sponsorship of the US-based Council on Foreign Relations (CFR). He’s absorbed by the idea of using science fiction as a way of shaping resiliency and encouraging futuristic thinking, calling SF “…a kind of marketing for a grand future for humanity. It creates a need. It creates future envy. We get hooked on a vision, whether Utopian, or just plain cooler than today, and we want to bring it into being.”

‘Future envy’ — lovely construction, that, and so true! As to the objection that science fiction is escapist in its orientation, Garretson has this to say:

If the duties of the present consumed my every minute, left me without the leisure time and resources (including literacy) to acquire such books, or discouraged me from thinking about a future different than the status quo, I might chose escapist literature if any at all, and might prefer themes that reflected useful themes for my life–acceptance of the vicissitudes of fate, and a smallness of human beings before society’s structure and forces and those of a cruel, capricious, and uncontrollable nature.

To read SF is to pre-suppose that my daily life allows for such leisure time, and that I can imagine a future different in some meaningful way than today, where both mankind in respect to nature, and individuals in respect to both society and nature can be a meaningful actor.

Science Fiction and the Long View

I think what Garretson is getting at here ties directly to our own emphasis on long-term thinking. An optimistic turn of mind is one that sees the power of the individual to shape the future, even when the results one is working toward will not be accomplished necessarily within one’s own lifetime. We all need to be reminded of that outlook, especially when the slow pace of change (and the ongoing budgetary problems involved in any space exploration) tempt us into disillusionment. This is a good interview to read when you need a bit of bucking up. It will remind you that the interstellar future, in whatever form we realize it, is an achievement worth thinking about and working for.

Let me close by quoting Garretson again, this time on where he sees science fiction going:

I am also of the opinion that the best way to predict the future is to create it. So let me attempt to create the future of science fiction with a bit of criticism. I think today’s sci-fi is too dark, it is too pre-occupied with humanity’s problems, and not sufficiently concerned with stroking its ambitions and setting new vistas. I think science fiction needs to pull back a bit from the space-opera fantasy, and transcend the cyber-punk darkness.

Another good phrase: ‘transcend the cyber-punk darkness.’ I hear similar sentiments from many long-term science fiction fans (Les Johnson and I had this discussion at the Aosta conference on a walk before dinner one day). Garretson continues:

I think right now we most need science fiction that creates a compelling vision of where we can take humanity over perhaps 3 generations using real, not just imagined technology… I believe there is a real world of the future that could involve a sustainable, developed world getting its energy from Space Solar Power, protecting Earth from asteroids, mining the sky for valuable minerals, and protecting our climate. Where access to space through space planes and other new innovations is common. I think we could use that as a stepping stone to free-flying space colonies. How different would that be? What would it be like to live in that world? What kind of institutions would make it work? How can we hook kids on the science it takes to put it all together? How do we get them to decide: “I want to solve that problem”,”I want to live in that world!”

If we let it tap its deepest roots, science fiction can indeed be the stuff that dreams are made of. Be sure to read all of this absorbing interview.