Any unexpected kink in the debris disk surrounding a young star is often attributed to a planet forming amongst the gas and dust. But that may not be the only explanation. In fact, new work by John Debes and team at NASA GSFC points to an alternative: The motion of the infant system through insterstellar gas. Thus we have yet another reminder that space is not truly empty, and that patches of gas can play their role in planet formation.

Debes and colleagues have been looking at infant systems like that around the star HD 32297, some 340 light years from Earth in the constellation Orion. About 100 million years old, the star is surrounded by a dust disk that resembles what our Solar System probably looked like not long after the major planets formed. Noticing that the dust disk around the star was warped, the team was led to link the finding to the presence of nearby interstellar gas clouds. The idea of interstellar gas drag upon a stellar system moving through such a cloud seems a natural fit in this system and elsewhere.

The mechanism suggested here is that stars encounter a gas cloud and experience forces that shape their disks. Says Debes:

“The disks contain small comet- or asteroid-like bodies that may grow to form planets. These small bodies often collide, which produces a lot of fine dust. The small particles slam into the flow, slow down, and gradually bend from their original trajectories to follow it.”

Another young star, HD 61005 in the constellation Puppis, shows a disk edge that is bent slightly away from the direction of stellar motion, with a wake of fine dust trailing behind. This ‘face-on’ encounter differs from what we would expect when the disk moves edgewise through interstellar gas, causing effects that deform the disk on the side inside the cloud. While the inner portions of the disk are relativly unaffected, the outer regions show ample evidence of the drag effect. Presumably, such influences would leave a signature in outer debris rings like our own Edgeworth/Kuiper belt. 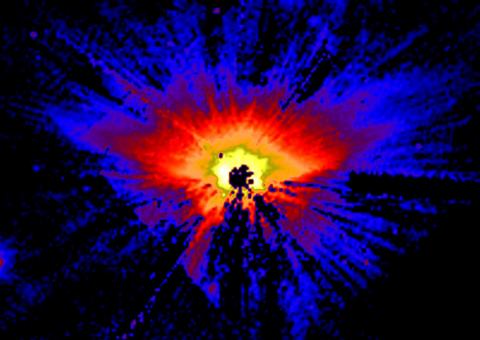 Image: The inner, yellow portion of HD 61005’s disk spans 5.4 billion miles, or about the width of Neptune’s orbit in our own solar system. This false-color Hubble view masks the star’s direct light to bring out detail in the disk. Credit: NASA/ESA/D. Hines (Space Science Inst., New Mexico) and G. Schneider (Univ. of Arizona).

This is an evanescent drag force, one that affects only the smallest particles (those about a micrometer across and smaller). Radiation pressure from the central star’s light would normally purge this dust from the system over time, but the interstellar drag can affect their position. You get the image of a filter through which some young systems pass, shedding dust, but Debes’ collaborator Marc Kuchner likens the effect to the summer breeze that scatters dandelion seeds. Either way, the more we learn about this effect, the better we’ll understand how to make sense out of what we see in other young stars’ debris disks. We’ll also have a better idea about planet formation in outer system regions where ice giants like Neptune form.