The Pursuit of Serendipity

Whenever I hear the word ‘serendipity,’ I think of my old mentor Norman Eliason, professor of medieval studies at UNC-Chapel Hill. During my years of grad work, Dr. Eliason passed along habits of precision and an eye for detail that I’ve tried, not always successfully, to emulate. One day when he asked about my work habits, I told him that I preferred to work outside the library, checking out books I needed or making copies of relevant journal articles.

I can still see him nodding slowly in his office chair, cigarette protruding from his hand, and I knew I’d said the wrong thing. “You need to be among the books,” he said. “Use your free time to look around and you’ll run into things in the stacks you never knew were there.” I took his advice and he was right. Serendipity –chance discovery, usually when looking for something else — worked. At least, it always has for me, but you have to put yourself in a place where discoveries are likely to be made. 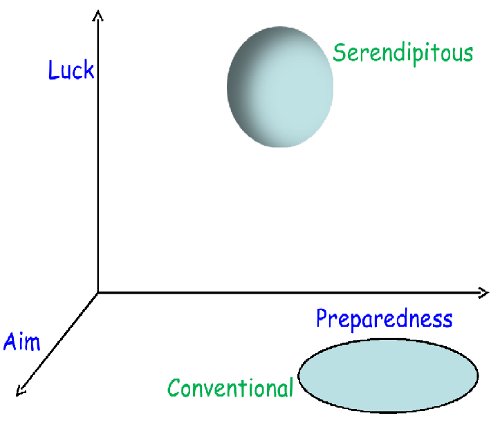 Image: Serendipitous discoveries combine luck (or chance), preparedness and aim. Conventional school science is usually concentrated on the preparedness, aim plane and totally new things are found on the preparedness, luck plane. There is usually, however, some aim to the observations, which is why I have tried through shading to make the region have volume. Credit (image and caption): A.C. Fabian.

‘Chance or unplanned discovery’ is how Andrew Fabian (University of Cambridge) defines serendipity, but I always add in a notion of good fortune. To me, serendipity means not only making an unexpected find, but making one that materially advances an investigation. Fabian probably wouldn’t disagree, based on the recent paper he wrote on the subject of serendipity in astronomy. Consider:

In contrast with school laboratory science where the aim is to plan and carry out an experiment in controlled conditions, in general astronomers cannot do this and must rely on finding something or a situation which suits. Often, the possibilities afforded by a phenomenon are only appreciated later, after the surprise of the discovery has worn off.

Fabian also quotes Pasteur’s famous “Chance favors the prepared mind.” In any case, we find by looking at examples of serendipity in astronomy that such discoveries often push our thinking into new areas. Fabian also notes the tension inherent in this process, contrasting a ‘fishing expedition’ against the tight methodology that science prefers. This is probably because serendipity seems entirely random, but its history of discovery is robust. 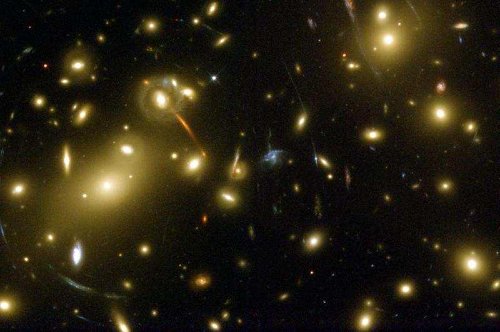 Image: A foreground galactic cluser whose total mass is gravitationally bending the light from distant galaxies into many arcs. How many such images were catalogued before gravitational lensing of galactic objects was understood? Credit: A.C. Fabian.

In the cases Fabian is most interested in, people looking for one thing ran into quite another. He runs through other cases of unexpected discovery, making the reader wonder how many significant things are waiting to be found in data already on our hard disks and even locked up in old astronomical images. Who knows what mysteries might still unfold from a decades old Palomar photograph?

Fabian wonders whether there is a way to turn serendipity into a tool that can facilitate further discovery:

Does it not then make sense to tailor our research funding, both for the hardware – the telescopes – and for the modes of working, to take [serendipity] into account? This leads to a current dilemma. Facilities (and people) are increasingly expensive. Funding agencies using public funds want value for money so are most likely to fund projects and telescopes and teams where a successful outcome is predicted. This tends to mean looking into areas close to where we know, rather than stepping out into the unknown. In the case of serendipitous discovery there is little that can be predicted with certainty, we can only argue on the basis of past success. It means stepping out boldly in discovery space.

He goes on to argue in this paper that direct approaches to fundamental problems may sometimes make us too narrow in our investigation. Recalling that a good view of many celestial objects comes with averted vision rather than direct focus, he champions ‘general astronomical observatories of all wavebands’ as the best way to target the unexpected, adding:

It is ironic that our telescopes are remembered mostly for the serendipitous discoveries they made… and not for the issues for which the original science case was made, yet we put most of our efforts into the known science aspects of the science case for a new telescope. Rather like the common view of democracy, or peer review, this common approach is highly flawed but is however the best available.

I take this to mean that there may be no way to channel serendipity, but we should not forget the role it has played in past discovery. Fabian can cite examples from the Keck telescopes ranging from studies of Type I supernovae and the accelerating universe to the discovery of Pluto-sized dwarf planets. The paper is an intriguing survey of the chance element in discovery and one that emphasizes the importance of both preparation and openness to the unknown.

The paper is Fabian, “Serendipity in Astronomy,” to be published in Serendipity and available online.