The other day I made a crack about a particular piece of artwork not being up to snuff, said item being an illustration accompanying a news release about a recent astronomical find. Maybe I was just out of sorts that day. In any case, what’s significant to me about much of the artwork floating around to illustrate news stories is that it’s generally quite good. Sure, we’re talking about ‘artist’s concepts’ of things like exoplanets and other distant objects, but they’re usually concepts informed by current data and they’re well executed. 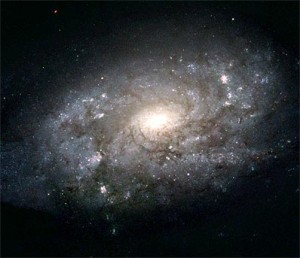 Then I ran across Jeff Foust’s essay on art and space in the Space Review and got to thinking about what had propelled me as a kid into this kind of work. We had a fabulous network of community libraries in St. Louis back in the 1950s and ’60s, and I made good use of three of them in particular. I’d stock up on science books and more or less read the astronomy sections straight through, starting at one end and working across. The photographs of astronomical objects were helpful, but the artwork was often what seized my mind.

Image: An artist’s conception of the Milky Way as seen from outside. Credit: NASA, ESA and The Hubble Heritage Team (AURA/STScI).

Naturally, Chesley Bonestell comes to mind, the man responsible for blowing more minds in that era than any other space artist (I still see Titan in Bonestell’s terms, despite everything we’ve learned about it since). Be sure to read Gregory Benford’s reprint of an early essay he wrote on a visit to Bonestell’s home. A snippet:

Does he ever read the things he has illustrated? No, he doesn’t like science fiction very much. Not enough solidity, perhaps. He rarely if ever willingly puts a human artifact into his work, a spaceship or a pressure dome, or a space-suited figure. He doesn’t have any idea of what the future will bring and feels awkward trying to visualize it. But stars and planets, yes, the astronomer friends he has can give him descriptions of how things must be there and he can see it, too, in some closed mind’s eye, so that it comes out right. Most science fiction is quickly outdated, anyway. Look at all the fins on space ships, and the cloudless Earths. Better to stay away from it.

Fascinating. But Foust reminds me that so doughty a figure as Alan Bean is a well-known artist in his own right, having recently opened an exhibition at the National Air and Space Museum in Washington. It’s amusing to see him quoted as saying people used to chide him about painting Earthly scenes. After all, he was the first artist in history to go some place besides the Earth. Why wasn’t he painting scenes from his Apollo 12 experience in 1969? 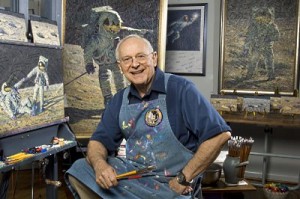 Bean went on to become a full-time artist, and I can only imagine the reaction of some of his associates when he made that move. Now he’s working in intriguing mixed media, using textures he creates from objects like lunar spacesuit boots and working lunar dust particles into his work, extracted from the patches of his suit. If the first career was satisfying, Bean now says he has developed “the heart of an artist,” a changeover that took 28 years to accomplish.

Foust also looks at a panel on space art at the recent Mars Society Convention at the University of Maryland, where author Andrew Chaikin reminisced:

“I can say that I’m probably sitting here today because of space art. That’s what hooked me when I was five years old. The illustrations in my astronomy books when I was a kid were, as I have written, like ‘magic portals’ that transported me from my parents’ house to other worlds.”

Chaikin and I seem to have shared a common childhood experience. And I also think Emil de Cou, associate conductor of the National Symphony Orchestra in Washington, is on to something important:

“There used to be a much closer overlap between the imaginative source of science and art that was shared in the years before that caught so much of our imagination. That’s why everybody is in this room today, not so much because of some hard scientific fact that you read as a child, but it was from reading Amazing Stories magazine, or watching Star Trek or Lost in Space.” 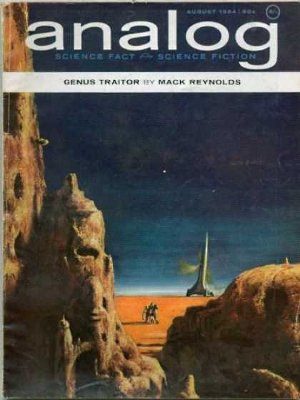 In my case, it was indeed Amazing Stories, along with the Astounding/Analog of the later Campbell era and H.L. Gold’s Galaxy, that provided much of the imagery. Those wonderful magazine covers worked their magic as much, if not more so, than blurry views from Palomar, keeping me wondering what it would be like to actually see some of these objects up close, if not walk upon their surfaces. Can art reawaken the spirit of exploration that seems so much on the wane?

Let’s hope so. We have no shortage of talented artists working this turf, and the Net is spreading their work more widely than ever. Have a look at the members’ page for the International Association of Astronomical Artists, where you’ll find Web sites listed for Lynette Cook, Don Dixon, Dan Durda, David Hardy, Rich Sternbach and many more. A few hours exploring these scenes may remind you of that early thrill of discovery that propelled so many into space sciences.