﻿I love to run into genuine enthusiasm when someone is doing cutting-edge science, and Didier Queloz (Observatoire de Geneve) has not let me down. Here the astronomer is discussing CoRoT-7b, which new studies have determined is a rocky world:

“This is science at its thrilling and amazing best. We did everything we could to learn what the object discovered by the CoRoT satellite looks like and we found a unique system.”

Amazing indeed. We knew from CoRoT’s transit measurements that the radius of this planet was about twice that of Earth. Queloz and team went to work with the HARPS spectroscope (High Accuracy Radial velocity Planet Searcher) at ESO’s La Silla site in Chile, gathering fully seventy hours of observations on the system. What emerged was the best mass measurement for an exoplanet yet.

Combining that revealed mass — five times that of the Earth — with CoRoT’s radius readings, we can deduce that CoRoT-7b is about as dense as Earth, and thus almost certainly a rocky world. This was tricky work, because stellar activity on the star’s surface can confuse the precise measurements needed for these radial velocity studies. Hence the need for the large number of observing hours.

“Since the planet’s orbit is aligned so that we see it crossing the face of its parent star — it is said to be transiting — we can actually measure, and not simply infer, the mass of the exoplanet, which is the smallest that has been precisely measured for an exoplanet. Moreover, as we have both the radius and the mass, we can determine the density and get a better idea of the internal structure of this planet.” 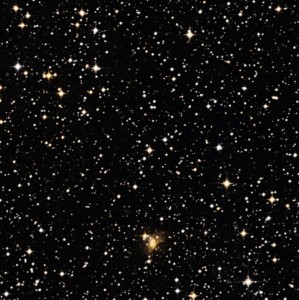 The find, announced at the European Planetary Sciences Congress in Potsdam this week, marks the first time the density of an exoplanet this small has been measured. Interestingly, the small world Gliese 581e has a minimum mass about twice that of Earth, but because the exact shape of its orbit is unknown, its real mass is conjectural. CoRoT’s transit data, on the other hand, make the geometry of CoRoT-7b’s orbit definable and allow precise mass determination.

Image: The star CoRoT-7 is located towards the constellation of Monoceros (the Unicorn) at a distance of about 500 light-years. Slightly smaller and cooler than our Sun, CoRoT-7 is also thought to be younger, with an age about 1.5 billion years. It is now known to have two planets, one of them being the first to be found with a density similar to that of Earth. CoRoT-7 is in the centre of the image. Credit: ESO.

CoRoT-7b transits its star every 20.4 hours, orbiting a mere 2.5 million kilometers out, some 23 times closer than Mercury is to our Sun. Given that extreme proximity, this world is not a benign place to be, at least not for carbon-based lifeforms like ourselves. Says Queloz:

“CoRoT-7b is so close that the place may well look like Dante’s Inferno, with a probable temperature on its ‘day-face’ above 2000 degrees and minus 200 degrees on its night face. Theoretical models suggest that the planet may have lava or boiling oceans on its surface. With such extreme conditions this planet is definitively not a place for life to develop.”

But there is yet more news about this system. The HARPS dataset used in this work also reveals the presence of a second ‘super Earth’ orbiting the same star in a slightly wider orbit. CoRoT-7c orbits in three days and seventeen hours, with a mass about eight times that of Earth. Unfortunately, no transits are visible for this one, so we can make no measurements of planetary radius and density.

The paper on this work is Queloz et al., “The CoRoT-7 planetary system: two orbiting Super-Earths,” to appear in Astronomy & Astrophysics Volume 506-1 (22 October 2009). Check here for early access to this paper. An ESO news release is also available.