Homing In on Planet Formation

Protoplanetary disks may not raise the same level of excitement that the discovery of new planets does, but to me, the idea of watching a planetary system form is awe-inspiring. I can’t help but wonder whether, going back about five billion years or so, astronomers around some distant star weren’t watching the early signs of planetary formation around our own star. Disks in their various stages give us a sense of the continuity of solar system development.

Continuity, that is, in the sense that stars seem to form planets as a matter of course. But we’re seeing yet more evidence this week that protoplanetary disks can vary markedly from star to star. Now comes news of the dust cloud around 51 Ophiuchi, which turns out to be not one but two distinct disks, an inner one with grains 10 micrometers and larger in diameter (based on infrared observations), and an outer one made up of primarily 0.1 micrometer grains. 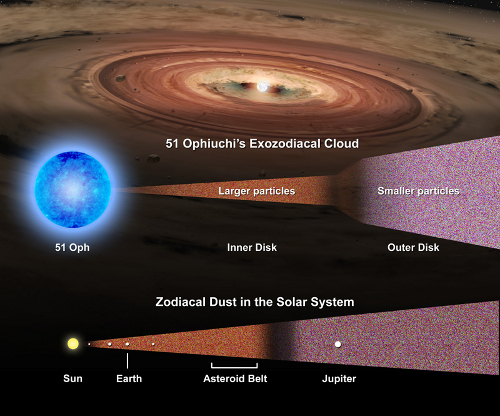 Image: This graphic compares the inner and outer disk of the 51 Ophiuchi system to the location of the planets and asteroid belt of the Solar System. Credit: NASA/GSFC/Marc Kuchner and Francis Reddy.

The inner disk around this B-class star extends out to four AU and is considered one of the most compact such disks ever detected. The outer disk goes from seven AU out to about 1200 AU. In similar systems, inner and outer clouds are distinct, but 51 Ophiuchi, some 260 times more luminous than the Sun, offers up a change of pace. Here the disks seem to be connected, with the system having only a single belt of asteroids. Is this an infant system entering the late stages of planet building? Are terrestrial planets forming in the stellar haze?

Whatever the case, there is a lot of dust here. Christopher Stark (NASA GSFC) describes it this way:

“Our study shows that 51 Ophiuchi’s disk is more than 100,000 times denser than the zodiacal dust in the solar system. This suggests that the system is still relatively young, with many colliding bodies producing vast amounts of dust.”

Interesting work, and a study that takes advantage of the Keck Observatory’s interferometry capabilities to make high resolution measurements equal to a telescope as large as the distance between the primary mirrors involved, some 85 meters. The interferometer’s Nuller was then used to block direct starlight from the star, allowing the dust cloud to be measured to great precision. Observations from other instruments helped to fill out the picture.

We also got word this week of the unusual behavior of the disk around the young star LRLL 31, whose light has been seen to vary in as little time as a single week. One possibility here is the presence of a planet close to the star, which could be causing the planet-forming material to vary in thickness as it orbits the star.

James Muzerolle and team (Space Telescope Science Institute) are behind this one, having set about to study the IC 348 star-forming region in the constellation Perseus. These are young stars, about two to three million years old and some 1000 light years from Earth. Working with the Spitzer instrument, the team found changes to the light from the inner region of the system disk. Spitzer has shown that the disk has both an inner and an outer gap. Says Kevin Flaherty (UA, Tucson), “Transition disks are rare enough, so to see one with this type of variability is really exciting.”

“A companion in the gap of an almost edge-on disk would periodically change the height of the inner disk rim as it circles around the star: a higher rim would emit more light at shorter wavelengths because it is larger and hot, but at the same time, the high rim would shadow the cool material of the outer disk, causing a decrease in the longer-wavelength light. A low rim would do the opposite. This is exactly what we observe in our data.” 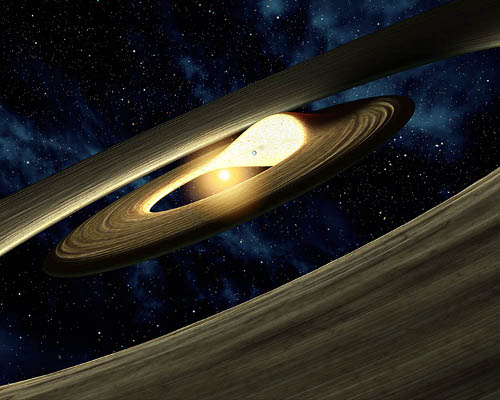 Image: An artist’s conception of LRLL 31. The data show that infrared light from the disk is changing over as little time as one week — a very unusual occurrence. In particular, light of different wavelengths seesawed back and forth, with short-wavelength light going up when long-wavelength light went down, and vice versa. According to astronomers, this change could be caused by a companion to the star (illustrated as a planet in this picture). As the companion spins around, its gravity would cause the wall of the inner disk to squeeze into a lump. This lump would also spin around the star, shadowing part of the outer disk. When the bright side of the lump is on the far side of the star, and facing Earth, more infrared light at shorter wavelengths should be observed (hotter material closer to the star emits shorter wavelengths of infrared light). In addition, the shadow of the lump should cause longer-wavelength infrared light from the outer disk to decrease. The opposite would be true when the lump is in front of the star and its bright side is hidden (shorter-wavelength light would go down, and longer-wavelength light up). This is precisely what Spitzer observed. Credit: NASA/JPL-Caltech/R. Hurt (SSC).

Fascinating stuff, and we’ll know more as astronomers follow up with ground-based telescopes. The paper on LRLL 31 will run in the Astrophysical Journal Letters; for now, a news release is available. The paper on the Keck work is Stark et al., “51 Ophiuchus: A Possible Beta Pictoris Analog Measured with the Keck Interferometer Nuller,” Astrophysical Journal 703 (2009), pp. 1188-1197 (abstract). A preprint is available.