Exoplanet Transits: Maxing Out Our Resources

I’m a great believer in getting the most out of older systems. The computer I do most of my work on is now eight years old. I have access to newer equipment, but I built this box with an eye toward longevity and I’m still happy with it. With the pace of technological change, it’s definitely gotten creaky despite additional memory, a new video card and various other upgrades. That means that Windows gets slower and slower on it, but then, I rarely use Windows, being an open source guy to the bone. Linux has always been my choice.

Now the nice thing about Linux is that, no matter which version I run (and I’ve run quite a few by now), I can get snappy performance out of this old box. The astronomical analogy isn’t too far to seek — these days we’re talking about building larger and larger Earth-based telescopes, and in fact have just inaugurated the Gran Telescopio Canarias on a 7,874-foot mountaintop in the Canary Islands, an instrument that has the largest segmented mirror — 10.4 meters — built so far for an optical-infrared telescope. All of which is great news, but consider how exoplanetary science also manages to pull good data out of much smaller, less heralded equipment.

Thus the June transit of HD 80606b, a gas giant of roughly Jupiter size some 200 light years away. About a dozen observatories went to work on the planet on the night of June 4, with a keen interest in tracking it because the previous transit, last February, had only been partially observed. The gas giant orbits once every 111 days and the transit is roughly twelve hours long, so astronomers adopted the tag-team approach to work on the event. Handing HD 80606b from Massachusetts to Florida (see below) to Indiana to Hawaii, various observatories captured some six hours of observations despite iffy weather along the route. 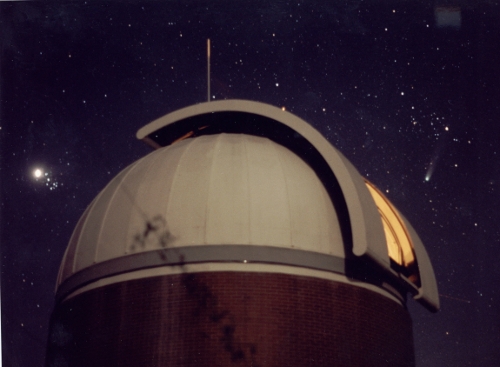 Thus an instrument like the 30-inch reflector at Rosemary Hill Observatory in Florida was able to play a key role in a string of observations that also included the 10-meter Keck I telescope in Hawaii. Useful observations, too, because HD 80806b’s orbit is an elongated ellipse whose cause is thought to be the pull of a companion star. According to this University of Florida news release, the recent observations have shown that the planet’s orbit is not aligned with the star’s rotation, evidence that this theory is correct. In any case, what a pleasure to be reminded that careful work can keep older equipment very much in the hunt.

Planet-hunter Greg Laughlin (UC-Santa Cruz) also commented on the collaboration, from which this:

This is just the sort of project that underscores the great value of ad-hoc collaborations. The Florida ingress observations, for example, were made using the University of Florida’s recently refurbished Rosemary Hill Observatory, 30 miles from Gainesville. The DeKalb observations, made by Indiana amateur Donn Starkey, produced reduced data that were among the best in the entire aggregate. Mount Laguna Observatory, run by San Diego State University, has generated many cutting-edge exoplanet observations, including critical photometry in the Fall 2007 HD 17156b campaign. The University of Hawaii 2.2m telescope turned out photometry with astonishing rms=0.00031 precision. And as the cherry on top, the simultaneous commandeering of not one but two major telescopes on Mauna Kea? It seems that perhaps someone has made a Faustian bargain.

The latest transit of HD 80606b was last Thursday morning. We’ll see what turned up.