Habitability is always a matter of definition. Is it a measure of suitability for human life? Or do we take the larger astrobiological view that it’s based on suitability for microbial life, in which case we go from a narrowly defined habitable zone here in our Solar System to one that could potentially stretch from the upper atmosphere of Venus to the suspected subsurface aquifers on some Kuiper Belt objects. But these qualitative definitions have thus far lacked a quantitative counterpart, a method to quantify and compare potentially living worlds.

The matter has drawn the attention of Abel Mendez (University of Puerto Rico, Arecibo), who discussed his quantitative evaluation of planetary habitability at the Division for Planetary Sciences meeting this week in Fajardo, Puerto Rico. One of his results stands out immediately. Using finely tuned planetary models, Mendez found that among Mars, Venus, Europa, Titan and Enceladus, the latter has the highest subsurface habitability. That makes the Saturnian moon a tempting but difficult target, the inaccessibility of its habitable region rendering Mars and Europa better compromises for near-term missions to places where habitability is still unresolved.

Take a look at the habitability functions for various worlds in the image below: 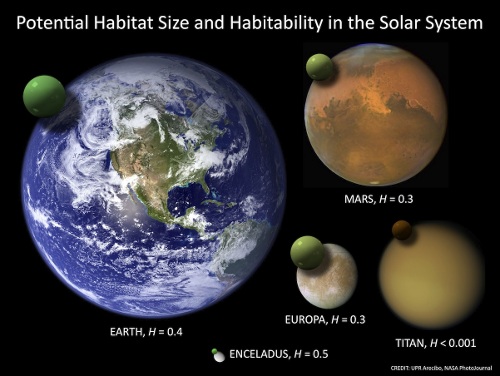 Image: This image shows a comparison of the potential habitable space available on Earth, Mars, Europa, Titan, and Enceladus. The green spheres represent the global volume with the right physical environment for most terrestrial microorganisms. On Earth, the biosphere includes parts of the atmosphere, oceans, and subsurface. The potential global habitats of the other planetary bodies are deep below their surface. Enceladus has the smallest volume but the highest habitat-planet size ratio followed by Europa. Surprisingly, it also has the highest mean habitability H, in the Solar System, although too deep for direct exploration. Mars and Europa are the best compromise between potential for life and accessibility. Credit: UPR Arecibo, NASA PhotoJournal.

Quantitative Habitability Theory could be useful if, as advertised, it sets up a baseline for making comparisons with past climate scenarios here on Earth, or examining other planets (including extrasolar ones) in light of a consistent set of principles. Here’s Mendez’ explanation of QH Theory:

“QH Theory is based on two new biophysical parameters: the habitability H, as a relative measure of the potential for life of an environment, or habitat quality, and the habitation M, as a relative measure of biodensity, or occupancy. Both parameters are related to other physiological and environmental variables and can be used to make predictions about the distribution, abundance, and productivity of primary producers, such as plants and phytoplankton, and microbial life in general. Initially, habitability was modeled from the environment’s temperature and humidity because they are easier to measure at planetary scales with ground or orbital instruments. Global habitability and habitations maps were constructed of terrestrial land and ocean areas with data gridded at various spatial and temporal resolutions. Preliminary work shows that the QH Theory is comparable to existing models in predicting terrestrial primary productivity.”

Mendez has established a quantity called Standard Primary Habitability that uses a variety of criteria for establishing the surface habitability on a given world. Interestingly, while the current SPH of Earth is close to 0.7, the figure has been as high as 0.9 in earlier periods, including the late Cretaceous, the time of the dinosaurs’ extinction. Earth achieved, in other words, a higher level of habitability in that era than today, at least as quantified by Mendez, until the events that led to the K/T extinction occurred.

James Kasting (Penn State) finds Mendez’ work useful, saying the methodology “…could also be extended to studies of planets around other stars that may be found during the next two decades.” Further integrating such factors as light, oxygen, carbon dioxide and nutrient concentrations will expand the model for Earth and help scientists extend it to habitable zones beyond.