Imagine a boat from Earth drifting across an alien sea. Something like that could happen as early as 2022 if Ellen Stofan (Proxemy Research) can talk the powers that be into the venture. Stofan envisions a new mission to Titan, the only other place in the Solar System known to have bodies of liquid on its surface. The methane and ethane lakes revealed by Cassini show some bodies as large as the Black Sea or the Great Lakes of North America. Stofan’s target: Ligeia Mare or Kraken Mare, two of the larger possibilities revealed by the orbiter. 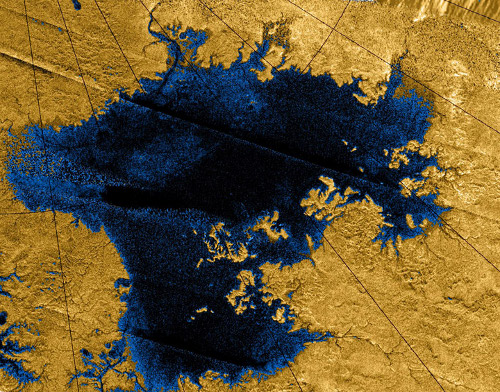 What an interesting off-shoot from the conventional rover concept, but then, Titan seems to inspire such things. Various types of airship designs have been put forward for studying the Saturnian moon, and at the Aosta conference in July, Giancarlo Genta described the workings of a hypothetical Titan rover that could take to the lakes as needed, converting itself into a floating research station. Stofan’s idea loses the rover capability. It is all boat, though it may not look like one.

What the planetary geologist envisions is a capsule that would be dropped directly into the target lake, with a mast to hold a camera. Drifting for months, pushed by local winds, the probe would use a nuclear-powered engine to run experiments and return data to Earth. When interviewed recently on National Public Radio, Stofan spoke about conditions in such a lake, including the possibility of a storm:

“In fact, we’d love for that to happen, to be able to return an image showing a rainy day on Titan and to see those methane raindrops falling down into the lake. The wind might kick up a little, but nothing as violent as the tropical storms and hurricanes we get here on Earth.”

The Discovery-class mission being proposed to NASA would launch around 2016 and arrive some six years later, assuming NASA chooses to go with the concept (the agency is going to be issuing a call for proposals for its Discovery missions shortly). So many good mission ideas, so little money to work with! But if by chance the Titan boat makes the cut, just imagine the view we would have from the camera mounted on its mast. You can hear Stofan interviewed on the Titan boat idea at this NPR page.

Thanks to Eric Davis for the tip on Stofan’s work. I’m also reminded that we looked not long ago at Stofan’s fine book (with astronaut Tom Jones) Planetology: Unlocking the Secrets of the Solar System (National Geographic, 2008).