More than 75 exoplanets in thirty different planetary systems is an impressive score, and that’s what HARPS has compiled since its installation in 2003. The High Accuracy Radial Velocity Planet Searcher is the spectrograph for the European Southern Observatory’s 3.6-meter telescope at La Silla (Chile). Built by a consortium led by Michel Mayor (Geneva Observatory), HARPS does its work by measuring the minute changes in a star’s radial velocity that flag the presence of an unseen companion.

Most of the roughly four hundred exoplanets discovered to date have been found through radial velocity methods. The figure of 400 includes the latest results from HARPS, which is back in the news with the announcement of 32 new exoplanets, found as part of a five year program using observing time given to the HARPS consortium in return for building the instrument. One of the new worlds is Gliese 667 Cb [see andy’s note below], a six Earth-mass planet in a triple star system. The planets announced today range from five times the mass of Earth to up to five times the mass of Jupiter. 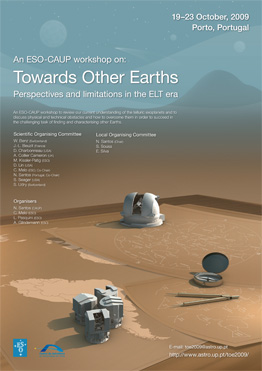 At a stroke, HARPS has boosted the known population of low-mass planets by thirty percent. No wonder Udry is encouraged. HARPS’ long suit is its sensitivity, enabling it to detect the signature of these smaller worlds. 28 planets with a mass of less than twenty times that of Earth have been found, and HARPS is responsible for 24 of them. Most of the new low-mass candidates reside in multi-planet systems, with up to five planets per system.

The new planets were announced today at the ESO/CAUP conference Toward Other Earths: Perspectives and Limitations in the ELT Era, now taking place in Portugal. Out of the work, eight papers are in the submission process at Astronomy & Astrophysics. We’ll know more as these papers become available, but we do know the HARPS consortium’s target list focused on solar-like stars, low mass dwarfs and stars with lower metal content than the Sun. The results include several giant planets in M-dwarf systems and, interestingly enough, three candidate exoplanets that showed up around metal-deficient stars.

Addendum: This ESO news release has more, including a brief video interview with Michel Mayor.

Next post: Beyond Darwin: The Future of Exoplanet Imaging