We’re making progress at detecting the signatures of organic chemicals on other planets. Mark Swain (JPL) and team have already made a name for themselves in this arena by their detection of carbon dioxide in the atmosphere of the ‘hot Jupiter’ HD 189733b, which followed earlier Hubble and Spitzer observations that revealed water vapor and methane there. Now they’ve used the same observatories to study another hot gas giant, HD 209458b, which orbits a star 150 light years away in Pegasus.

The result: A detection of basic materials necessary for life. Swain spells out what the team found and its significance:

“[HD 209458b is] the second planet outside our solar system in which water, methane and carbon dioxide have been found, which are potentially important for biological processes in habitable planets. Detecting organic compounds in two exoplanets now raises the possibility that it will become commonplace to find planets with molecules that may be tied to life.” 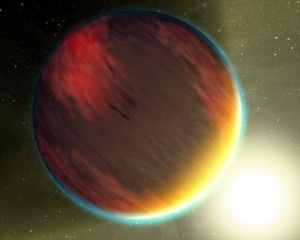 No one is suggesting these planets are habitable (at least not by any kind of life we currently understand), but the work demonstrates our progress at refining the tools of spectroscopy, splitting light into its components to tease out the signatures of different chemicals. At this stage, we’re showing the method is workable on those exoplanet atmospheres now within range of our study. We’re now entering the phase of characterizing and comparing such atmospheres, a process that helps us build the expertise that will eventually lead, let’s hope, to finding organic chemicals on Earth-like planets.

Image: The basic chemistry for life has been detected in a second hot gas planet, HD 209458b, depicted in this artist’s concept. Two of NASA’s Great Observatories – the Hubble Space Telescope and Spitzer Space Telescope, yielded spectral observations that revealed molecules of carbon dioxide, methane and water vapor in the planet’s atmosphere. HD 209458b, bigger than Jupiter, occupies a tight, 3.5-day orbit around a sun-like star about 150 light years away in the constellation Pegasus. Credit: NASA/JPL-Caltech.

The comparison of just two planets in this manner is already intriguing. While the relative amounts of water and carbon dioxide are similar, methane is a different matter. HD 209458b shows a greater abundance of methane than HD 189733b. Swain again:

“This demonstrates that we can detect the molecules that matter for life processes. The high methane abundance is telling us something. It could mean there was something special about the formation of this planet.”

What that something might be remains an open question, but as we begin to compare hot Jupiters using existing tools like Hubble and Spitzer, we’ll build a context in which to place these findings. That will teach us more about how hot Jupiters form, but it will also sharpen our analytical tools for studying the kind of interesting worlds we hope Kepler and CoRoT will find, planets that might be capable of sustaining life as we know it. When that day comes, we’ll want to be sharp enough to distinguish life signs from the host of other processes that could produce a similar chemical composition.

Previous post: Beyond Darwin: The Future of Exoplanet Imaging