Report on the Project Icarus Symposium

The Tau Zero Foundation has been working with the British Interplanetary Society on Project Icarus, a starship study that updates the famous Project Daedalus work from the 1970s. Pat Galea, a software engineer with a lively interest in the physics of interstellar flight, attended the recent symposium that launched the project, and here provides us with a report that I will publish in two parts, concluding tomorrow.

Just over thirty years ago, British Interplanetary Society (BIS) members carried out one of the most complete studies of an interstellar vehicle ever made. Even today, Project Daedalus retains its status as an outstandingly comprehensive reference design. Its final report sits on the shelf of many a starship enthusiast.

In the intervening years, technology and science have advanced in many of the areas that are crucial to the Daedalus mission plan and design. The time has come to re-examine Daedalus in light of the progress that has been made, so Kelvin Long and Ian Crawford organized a one-day symposium held at BIS headquarters in London, UK, on 30 September 2009. This meeting gathered experts on the subject areas to be examined, as well as some of the original Daedalus team, not only to look at the original design, but also to launch Project Icarus, a new project that will produce an updated interstellar craft design.

The Need for Infrastructure

The Daedalus craft at launch has a mass of 54,000 tons; most of that is fuel. Building and fueling this thing is, to say the least, an immense undertaking. Daedalus would require an enormous amount of infrastructure in place before it could be built and launched. Rather than build this all up solely for producing interstellar craft, we could (and probably would) have most of this capacity in place for supporting interplanetary transport. Bob Parkinson gave a presentation on the use of Daedalus-type vehicles for vehicles that can shuttle around our solar system on missions such as Mars colonization, asteroid diversion, and fast transit missions to the outer planets.

Daedalus calls for a fusion pulse engine, in which high-energy electron beams are fired at pellets containing Deuterium (D) and Helium-3 (He3), causing them to undergo nuclear fusion, and releasing a huge amount of energy. Some of this energy is captured by the craft, and the subsequent release of energy from this capture propels the ship forward. The Daedalus plan requires a system for obtaining the He3 from the atmosphere of Jupiter. This is, indeed, a big engineering challenge, but as Parkinson pointed out, with a fleet of vehicles being used for local transport anyway, we are only worrying about the marginal cost of producing the extra fuel required for the interstellar probe.

Parkinson presented some background on the Jovian extraction process, and examined some other options that have been suggested. One possibility is to extract He3 from the lunar regolith. Unfortunately, it appears that while this is technically possible, the huge energy required to extract meager amounts of He3 from immense masses of regolith renders the process economically unfeasible. In brief, the Jupiter mining system is still the preferred option for fueling Daedalus. 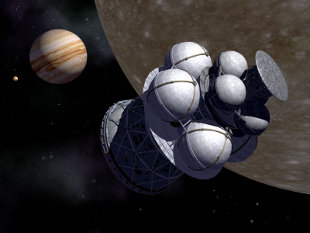 Other nuclear reactions, not involving He3, are possible candidates. The reason the original team chose the D/He3 reaction is that it is relatively clean, producing very few neutrons. We prefer to have charged particles coming from the reaction as we can ‘bend’ the path of these using electromagnetic fields. Uncharged neutrons are a nuisance, hitting the craft and causing structural damage over time. Other reactions can have different advantages, however, such as being easier to initiate, so the case is far from closed.

Image: Daedalus prior to departure, in orbit around Europa. Credit: Adrian Mann.

Richard Osborne considered other aspects of the infrastructure question. While we cannot know the details of the systems that will be in place at the time a Daedalus-like craft is launched, we can sketch out the types of systems that will be required for launch and assembly of these probes. Osborne drew a high-level picture of the process as a whole, and broke it down into its constituent elements. For example, a Single-Stage-To-Orbit (SSTO) vehicle will be essential for launching components from Earth, and a space dockyard is needed for assembling the craft (and presumably building other local transport vehicles). Overall, we were seeing from Osborne effectively a first draft plan for industrializing our solar system.

Astrobiology and the Need to Linger

Ian Crawford explored the planetary science and astrobiology case for pursuing interstellar flight. He explained the concept of habitable zones (those areas around stars that are suitable for life), and discussed the kinds of planets that can support life. In our own solar system, we have expanded our view of the candidates for habitability over the last thirty years. It is quite common these days to read discussions of the potential for life being found in moons of the gas giants, and in even more exotic locations. Crawford discussed the kinds of chemical signatures that we might look for when examining planets and moons that could indicate the presence of biological activity. These tests could play a role in the extensive search for exoplanets that is being undertaken right now. Similar tests could also be carried out by a probe actually in a candidate solar system, where its proximity to the planets would give it a huge advantage in terms of sensitivity to the signatures it is looking for.

One aspect of the Daedalus mission profile has a very significant impact on this type of exploration. To keep the total mission time down to an acceptable duration, the Daedalus probe does not brake. Once it is accelerated up to its cruising speed of approximately 12% of the speed of light, it maintains this even through the encounter phase at the destination. This means that after a flight of about fifty years, the craft actually spends less than a day in the target system. Fitting useful science into this short window of opportunity would be a challenge, particularly if close-up operations are desired on a variety of planetary targets. Daedalus partially mitigated this problem by launching a series of sub-probes once it arrived in the destination system, each of which could be assigned to a different target. However, these probes would inherit the fast speed of the main craft, so although they would be able to get good close looks at the planets, they too would only have short periods in which to do so.

Crawford expressed a strong preference for a mission that is decelerated in the target solar system so that the craft (and any sub-probes) can hang around for longer, taking a good look around, and returning much more science. Daedalus itself could be configured to fly this way, but at the cost of significantly extending the mission time to 100 years or more. It comes down to a decision about whether the people building the Daedalus probe would be prepared to accept a mission of such a long duration in return for better science. 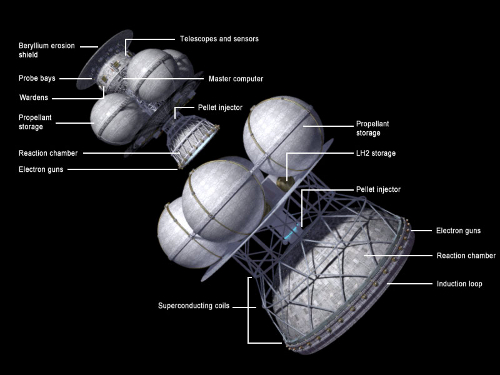 The Choice of Targets

Martyn Fogg considered the star systems ‘near’ Sol using various criteria for selecting a suitable destination for a Daedalus craft. In the original plan, the chosen target was Barnard’s Star. At the time, there appeared to be evidence that there was a planet orbiting the star. This made it a good candidate for the mission, as no other exoplanets had been discovered at that time, and it was not known whether planet formation around stars was common or rare. It now appears that the evidence for this planet was not as good as had been thought. In the meantime, over 300 exoplanets have been discovered in recent years around a great many stars.

Although we have detected many exoplanets, there is still a great deal to learn about how the planets form, and the types of planets that form around different types of stars. Fogg and others have been running computer simulations of stars and their surrounding environments in an attempt to establish this kind of information. More problematic than single stars (like the Sun) are the multiple star systems, which pose a challenge for planets because the presence of extra stars restricts the potential for planetary orbits that are stable over a prolonged period of time. The simulations that Fogg runs track the progress of the system as a whole over billions of years, from the formation of the planets through to the era of stable orbits. By running the simulation again and again, it is possible to observe (as Fogg demonstrated) the zones around the stars in which we might find planets.

We are hopefully going to be deluged with data about extra-solar planets over the next few years from sources such as Kepler. As more information comes in, we will be building up a better picture of the stars that will make the best candidates for a mission. Fogg has his work cut out!

To be concluded tomorrow.