Project Icarus will update the Project Daedalus starship designed by the British Interplanetary Society in the 1970s. As we saw yesterday, developments in technology allow new options in a number of areas, but also raise questions about the mission’s scope and choice of targets. Pat Galea now concludes his discussion of the recent Project Icarus symposium in London, after which the terms of reference for the project, now frozen, are listed.

Richard Obousy tackled the part of the system that is the most obvious, the most important and probably the most difficult: the engine. As I’ve noted above, the Daedalus propulsion system uses pulsed nuclear fusion to accelerate the craft to about 12% of the speed of light. Even at such an immense speed, the mission time to Barnard’s Star (5.9 light years from Sol) is about fifty years.

Obousy took us through different methods of propulsion that have been proposed, such as chemical rockets, electric ion engines and nuclear thermal rockets. He gave an overview of how nuclear fusion works, and various enhancements that could be made to the fusion process. 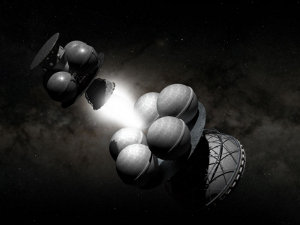 Current Earth-based production of antimatter is terribly meager at the moment. However, Obousy pointed out that much of the criticism we hear of the economics of current antimatter production is unfair, because the facilities were never built to produce antimatter efficiently. We can reasonably expect that truly dedicated industrial techniques to come will give us a much better return on our energy investment because they will be optimized for the purpose.

Onboard Power and Computing

Andreas Tziolas examined the power and computer systems that would be needed for Daedalus-like missions. Despite having a massive fusion pulse engine sitting at the back of the craft, there is still a need for separate systems that can provide the electrical power required for running the ship’s equipment. The engine won’t be running for the whole mission, and there needs to be some redundancy to cope with the inevitable failures which will occur over the lifetime of the voyage.

Tziolas examined several different power systems, such as batteries, fuel cells, flywheels and radio thermal generators (RTGs). Each system has its own advantages and disadvantages, so choosing the right systems depends upon a clear understanding of the mission parameters. For example, some systems work better over certain temperature ranges; other systems might have greater reliability over longer periods. By building a clear idea of the craft and the situations it will be operating in, it becomes possible to choose the most appropriate power systems.

Tziolas also explored the computer systems required on the craft. He emphasized that for such a long duration unmanned mission, there was a clear need for computer systems that have an advanced decision tree to cope with the huge variety of scenarios that the craft will encounter. These systems need to be fault tolerant, having no single point of failure, and be able to recover from any faults that do arise.

Parameters of the Project

Kelvin Long introduced Project Icarus, the aim of which is to produce an updated mission along similar lines to Daedalus, taking advantage of the progress that has been made in science and technology over the last thirty years. The terms of reference for the study have not been finalized yet, though Long presented a rough skeleton as a starting point. In open-floor discussions, the symposium attendees explored the range of mission parameters. It is clear that there is still a lot of work to do here before these parameters can be nailed down.

A couple of the most important parameters are closely related to each other:

The Daedalus team decided that it was important to set an upper limit for the mission time such that a young person at the start of a professional career could join the project at launch time, and still be working when the probe returns data from the destination system. This requires a mission time of no more than 40-50 years. The motive for this restriction stems from the desire to maintain interest in the mission throughout the entire duration, and hence to make the project appear worth doing in the first place.

There was much discussion on this point, as several attendees pointed out that there have been many projects in human history that have taken significantly longer than a single lifetime to complete, such as cathedrals and pyramids. Whether this kind of commitment could be made to support a super-lifetime mission is an interesting question.

Deceleration at the Target System?

The second mission parameter concerns whether we decelerate the probe at the target system, perhaps to place it in orbit around the star. The benefits of doing so are discussed briefly above, in the summary of Crawford’s talk. It would clearly be desirable to do so, but the penalty is that the mission time would be extended significantly, as the ship would have to hold on to a lot of its fuel in order to burn it in deceleration. 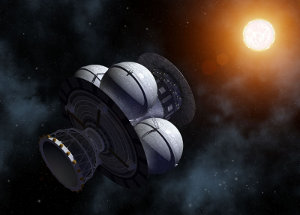 So we have a trade-off between the two parameters. It is possible that there may be hybrid solutions available, where the main probe carries on at full speed, while sub-probes are decelerated. There are many options here, but nature is harsh, so the choices are tough. If it’s decided that a super-lifetime mission is acceptable, then a rendezvous becomes more feasible.

Image: Daedalus was designed for a mission to Barnard’s Star. The Icarus team hopes to allow for a variety of target stars. Credit: Adrian Mann.

However, a long mission entails consideration of another potential problem: the “overtake” scenario. If we launch a probe that will take, say, 150 years to reach the target star, we may worry that in fifty years time we’ll be able to launch a probe with greater speed that can reach the target in only fifty years. That would mean we’d get results back from the later probe fifty years before the data from the earlier probe. So we might decide that there’s no point in launching the slow probe at all; we just wait until we can launch the fast one. Some argue that it’s still worth launching the slower probe, because data are data. We may get results from the newer fast probe first, but we’ll still be glad to get data from the older slow probe when it arrives.

Icarus and the Years Ahead

After hammering out and fixing the basic mission parameters, the Icarus project will take several years of hard work to produce a new design for an interstellar craft. How much this design will resemble Daedalus is anyone’s guess at this point, and it’s quite possible that scientific data obtained during the design project (such as exoplanets) will throw a few curve balls along the way. Ultimately, the designs will be completed and submitted for publication in the Journal of the British Interplanetary Society (JBIS), just as Daedalus was all those years ago.

The Daedalus team mentioned that working on the project changed the way they view the universe. I hope Icarus will do the same, not only for those working on it, but for everyone else who takes an interest in humanity’s future.

On November 4, the Icarus team froze the terms of reference for the Icarus project. The text below constitutes the Terms of Reference (ToR) for Project Icarus and sets out what is to be achieved by the design study. This is frozen for the duration of the project and essentially represents the initial requirements.

There is also the addition of a project scope as follows:

‘The required milestones should be defined in order to get to a potential launch of such a mission. This should include a credible design, mission profile, key technological development steps and other aspects as considered appropriate.’