From the fusion-powered Project Icarus, designed to handle the interstellar long-haul, to the first tentative solar sail experiments in near-Earth space seems like quite a jump. But we needed to be reminded of the need for research on both ends of the spectrum, the things that are doable today and the concepts we want to shape for tomorrow. How heartening, then, to see the Planetary Society’s new commitment to the solar sail in the form of a project called LightSail, which will include several missions designed to demonstrate the potential of photons for propulsion. 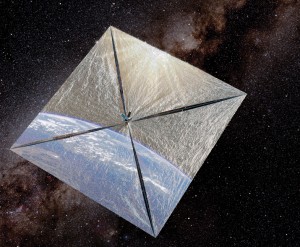 Make no mistake about it, solar sail technology is a practical solution for leaving the fuel at home. We know the principle works. Photons carry no mass but they do carry momentum. Missions designed to operate close to the Sun already have to factor in the pressure exerted by the photon stream, and in a famous case, controllers used the solar panels aboard the Mariner 10 spacecraft (launched in 1973 to explore Mercury) to re-orient the vehicle after it had lost its fix on Canopus, the star it was using for celestial guidance. We know the principle works, and we’ve gotten the solar sail up to near flight-readiness at NASA.

What we now know is that we cannot, in economic times like these, count on government agencies to proceed with the next step. The Planetary Society has raised the needed money (boosted considerably by a $1 million donation) to build Lightsail-1, creating the vehicle out of three Cubesat spacecraft. Based on early reports, the spacecraft sounds much like the NanoSail-D sailcraft created at Marshall Space Flight Center. Planetary Society vice-president Bill Nye notes, “To get sunlight to push us through space, we need a large sail attached to a small spacecraft. Lightsail-1 fits into a volume of just three liters before the sails unfurl to fly on light. It’s elegant.” NanoSail-D, likewise, is small enough to fit into a suitcase.

But Lightsail-1 will clearly be the first to reach space, assuming the Planetary Society fulfills its promise not to try the launch on another faulty Volna booster. Lightsail-1 represents early solar sail technology, 32 square meters of mylar arranged into four triangular sails placed in an orbit some 800 kilometers above the Earth, where the pressure of sunlight ought to increase its orbital energy. A second sail is intended to demonstrate a longer duration flight, with Lightsail-3 sent to L1, that interesting place where a sail can be ‘parked’ to serve as a solar weather station. The Planetary Society is hoping the craft will fly by the end of 2010. 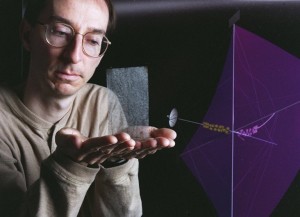 Mylar is a workable material for these experiments, though as we continue our investigations, we’ll need to move to much lighter materials, and more durable ones. You can certainly work with aluminized 0.5-micron mylar for the short term, but it is degraded by ultraviolet radiation. Areal density (mass divided by the area of the sail) is key, and advances in materials technology will help us achieve ever thinner sails. Much promise exists in so-called carbon-carbon, a carbon fiber material whose density is less than 1/10 ounce per square yard, the equivalent of flattening one raisin to the point that it covers a square yard. This stuff is light as smoke. But we have to get our early experiments flying before we push into these areas.

In speaking of solar sails, I always like to go back and quote J.D. Bernal, the British physicist and author of The World, the Flesh & the Devil (1929):

However it is effected, the first leaving of the earth will have provided us with the means of traveling through space with considerable acceleration and, therefore, the possibility of obtaining great velocities—even if the acceleration can only be maintained for a short time. If the problem of the utilization of solar energy has by that time been solved, the movement of these space vessels can be maintained indefinitely. Failing this, a form of space sailing might be developed which used the repulsive effect of the sun’s rays instead of wind. A space vessel spreading its large, metallic wings, acres in extent, to the full, might be blown to the limit of Neptune’s orbit. Then, to increase its speed, it would tack, close-hauled, down the gravitational field, spreading full sail again as it rushed past the sun.

Remember, Bernal was writing in 1929! Someday we’ll see missions like the one he describes, which is for all practical purposes a Sun-diver mission with a close solar pass to maximize acceleration. But we have much work to do before we can make this happen. Sail technologies are in my view the most likely to power our first true interstellar missions, beamed via laser or microwave to high velocities. Getting to that point in this early going will involve private and commercial funding. The Planetary Society’s Lightsail project reminds us that if government won’t do it, the private sector can respond.