The Lithium Clue to Exoplanets

The exoplanet watch among our readers is clearly in full operation, to judge from the number of backchannel messages I received about the latest work from HARPS (High Accuracy Radial Velocity Planet Searcher). The remarkable ESO spectrograph attached to the La Silla 3.6-meter telescope now offers evidence that Sun-like stars that host planets will show a sparser lithium signature than stars without planets. Says Garik Israelian, lead author of the paper now appearing in Nature:

“For almost ten years we have tried to find out what distinguishes stars with planetary systems from their barren cousins. We have now found that the amount of lithium in Sun-like stars depends on whether or not they have planets.” 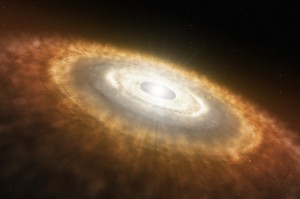 All of this helps us understand our own star, whose low levels of lithium (140 times less than it should have had when formed) have long been apparent. The HARPS work draws on an analysis of some 500 stars, including seventy known to host planets. Ace planet hunter Michel Mayor calls the sample the best available to date “to understand what makes planet-bearing stars unique.” The majority of the stars hosting planets showed less than one percent of the lithium possessed by other stars. Most stars should possess roughly the same amount of lithium unless the element, produced just after the Big Bang, had been destroyed inside the star.

Image: Artist’s impression of a baby star still surrounded by a protoplanetary disc in which planets are forming. Using ESO’s very successful HARPS spectrograph, a team of astronomers has found that Sun-like stars which host planets have destroyed their lithium much more efficiently than planet-free stars. This finding does not only shed light on the low levels of this chemical element in the Sun, solving a long-standing mystery, but also provides astronomers with a very efficient way to pick out the stars most likely to host planets. Credit: ESO.

So what exactly is going on here? How does a planet disturb the matter in a host star to rearrange the chemical elements found within its outer atmosphere, where lithium can exist? The Israelian’s team points to loss of angular momentum caused by the presence of planets, causing host stars to spin less rapidly and allowing their atmospheres to mix more freely. Lithium in the stellar atmospheres would thus be drawn to the stellar surface and destroyed. But stellar ages could also account for the difference, as this article in Nature News points out, noting comments to that effect by Jorge Melendez (University of Porto, Portugal).

The Israelian team disputes that idea, noting that all the stars in its sample are more than a billion years old, and arguing that its findings cannot be coincidence. If they’re right, we may have an observational tool that could speed up the exoplanet search. The paper is Israelian et al., “Enhanced lithium depletion in Sun-like stars with orbiting planets,” Nature 462 (12 November 2009), pp. 189-191 (abstract).