When the stars are properly aligned, expect remarkable things. How useful, for example, to find that a planet we would like to know much more about — HAT-P-7b, about 1000 light years from Earth — is not only providing intriguing transit information right now, but is also in Kepler’s field of view. We’d like to know whether there are massive outer planets in this system, or possibly a binary companion. These are questions that the Kepler observatory may be able to answer.

Any transiting exoplanet is obviously of high interest, but HAT-P-7b stands out a bit more following the publication of two recent papers in separate journals. Both used the Subaru Telescope to examine the planet’s unusual orbit, which appears to be retrograde or polar. This is useful stuff, because it’s telling us something about how planetary systems form, offering useful evidence about planetary migration models.

What we would expect is that planets that form in protoplanetary disks around young stars would have an orbital axis aligned with the stellar spin axis — this is certainly what we see in our own Solar System. But what we are finding around other stars compels us to look at planetary migration models that can disrupt this pattern. Interactions between giant planets or planets and a nearby companion star can cause tilted or retrograde orbits to occur, the latter being defined as orbits that are tilted by more than ninety degrees from the stellar spin axis.

A Japanese team led by Norio Narita (National Astronomical Observatory of Japan) worked with the Rossiter-McLaughlin effect, which produces a distortion in radial velocity data during a planetary transit. The diagram shows the effect, which is perceived as a change in the velocity of the star, but is actually the effect of the transiting planet on the star’s light. This is thorny, but bear with me: If a planet occults part of the approaching (blue-shifted) part of the star’s disk, the radial velocity of the star will appear to be slightly red-shifted, and vice-versa. The Rossiter-McLaughlin effect depends on the spin-orbit alignment of the system, which is why it is so useful.

Image: An illustration of the Rossiter-McLaughlin effect. As a star rotates, one part appears to be approaching, the other receding. During a planetary transit, we can see the Rossiter-McLaughlin effect as an apparent anomaly in the stellar radial velocity. The star appears to be receding if the transiting planet hides an approaching part and vice versa. We can observe this effect by precise radial velocity measurements. Note that if the planet orbits in a prograde manner, the planet first hides an approaching side and subsequently hides a receding side. Inversely, if the planet orbits in a retrograde manner, the effect occurs in reverse. Credit: National Astronomical Observatory of Japan.

Narita’s team found that HAT-P-7b shows clear evidence of a retrograde orbit, an observation confirmed by a US team led by Joshua N. Winn (MIT). So we have information about an unusual orbit but no migration model for this system, which is why finding other planets or a binary companion would be useful. Kepler’s help will be invaluable as we work to understand what appears to be a wide variety of planetary orbits, fitting these into theoretical models that explain the origin of each. 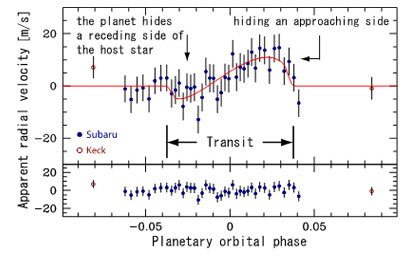 Image: The observational result of the Rossiter-McLaughlin effect on UT May 30, 2008 taken with the Subaru HDS (Narita et al. 2009). This figure shows that HAT-P-7b first hides a receding part of the star HAT-P-7 and subsequently hides an approaching side. National Astronomical Observatory of Japan.