To the two ongoing hunts for planets around the Alpha Centauri stars we can now add a third. John Hearnshaw (University of Canterbury, Christchurch) reports in a recent post on Cosmic Diary that the university’s Mt. John Observatory has begun a program to search for Earth-mass planets around Centauri A and B. Although the observatory is heavily invested in microlensing technologies (working with the Microlensing Observations in Astrophysics collaboration), the new efforts will put radial velocity methods to work using the Hercules spectrograph.

The program is a joint effort with Stuart Barnes at the Anglo-Australian Observatory and Mike Endl at the University of Texas (Austin). And as Hearnshaw notes, the problem is a formidable one, given that an Earth-mass planet in the habitable zone around Centauri A creates a ‘wobble’ of only 10 cm/s (slightly larger for the less massive Centauri B). Yet the observatory is banking on Hearnshaw’s statement that 30,000 spectra of Centauri A or B over three years can detect a habitable zone ‘Earth.’

The habitable zone around Centauri A should be found at about 1.2 AU, while 0.75 AU is calculated for Centauri B. What else do we know about the primary Centauri stars? Earlier work has demonstrated that no gas giants as massive as Jupiter can exist there — Doppler studies would have found them by now. But the case for Earth-mass planets remains open. Hearnshaw notes the more positive findings that have emerged in the past decade or so:

We are encouraged to undertake these key observations for several reasons. First, theoretical studies by Javiera Guedes et al. in 2008 showed that Earth-mass planets are likely to have formed in the alpha Centauri system. In their simulations, planets of mass 1 to 2 Earth masses always form in the habitable zone around alpha Cen B, no matter what the initial conditions. What’s more, Paul Holman and Matt Wiegert found that stable orbits are possible in this binary provided they are within about 3 A.U. of either star. The orbits are almost certain to be coplanar with the binary star orbit, which has a semi-major axis of 23 A.U. What is more, the binary orbit is tilted at 79 degrees to the line of sight, so any putative planetary orbits are likely to be at that same favourable angle for detecting Doppler shifts (if the angle is small, the orbits would be close to face on and no Doppler shifts are then detectable).

We’ve looked at the studies mentioned above repeatedly in these pages (run a search for past articles), but we’ve also noted recent work by Philippen Thébault (Stockholm Observatory), Francesco Marzari (University of Padova) and Hans Scholl (Observatoire de la Côte d’Azur), who question whether the accretion process of planetary formation would allow such planets to form. The heartening thing is that this dispute is likely to be settled one way or the other within a few short years. Mt. John Observatory already has several thousand spectra in its new campaign and intends to intensify the search, an effort Hearnshaw calls “a realistic target within our grasp.”

One other fortunate circumstance makes this the ideal programme for Mt John Observatory. Being the world’s southernmost optical observatory (at 44ºS), we are able to observe alpha Centauri for 12 months of the year, even in November and December. The star is circumpolar and passes the southern horizon at lower culmination at an altitude of some 15 degrees, when it is still readily observable. No other observatory can see alpha Centauri all year, and a periodic gap in the data every year can be disastrous when trying to detect periodic signals which may well have around a one-year period. We therefore plan to press ahead with the alpha Centauri campaign during 2010 and 2011, with the hope of making the historic discovery of an Earth-like analogue orbiting our nearest star, at just 4.3 light years distance. 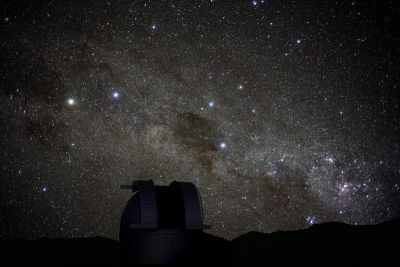 Image: The night sky above Mt. John Observatory. Note the Southern Cross (just above and to the right of the dome), with Alpha and Beta Centauri the two stars to its left. Alpha Centauri (the leftmost bright star) is a triple system made up of Centauri A, Centauri B and Proxima Centauri. Credit: Fraser Gunn.

We should know something, and relatively soon. Debra Fischer’s work at the Cerro Tololo Inter-American Observatory (Chile) is ongoing, as is that of Michel Mayor and Stéphane Udry using the High Accuracy Radial velocity Planet Searcher (HARPS) at the European Southern Observatory facilities at nearby La Silla. The betting here has been that while the Mayor team may be the first to find a larger world, an Earth-mass planet is likely to be claimed by Fischer, whose resources, unlike HARPS, are totally committed to the Centauri search. Now we add this interesting New Zealand campaign as excitement grows that whatever Centauri planets there be may soon be discovered.

Next post: Debra Fischer: Details of the Centauri Hunt