You won’t want to miss an interview with Debra Fischer now available on the MarketSaw site. The latter is a blog focused on 3D motion pictures, and thus the interest in Fischer’s work on Alpha Centauri draws from a cinematic base. Specifically, James Cameron’s new movie Avatar depicts a gas giant with a habitable moon around it, and the MarketSaw editors are interested in whether such a planet could exist around one of the Centauri stars. The interview that follows, discussing Fischer’s ongoing hunt for Centauri planets, is prime reading. I’ll quote from it, but you’ll want to read the whole thing (thanks to Vincenzo Liguori for the tip).

As to the gas giant question, we can answer that one quickly. Neither Centauri A nor Centauri B is orbited by a gas giant. We know this because enough data have accumulated on the question to rule such planets out. Stable orbits, says Fischer, don’t reach out much further than 2 AU around either star, and the lack of gas giants leaves smaller worlds a serious possibility, with the always tantalizing thought that there might be a terrestrial planet in the habitable zone. Fischer clarifies the orbital distances possible this way:

The stars themselves are in a very elongated, eccentric, elliptical orbit. At the widest part of their orbit, they are almost 40 AU (40 times the earth to sun distance) apart. That’s a comfortable separation for orbiting planets. But, when the stars, A and B, make their closest approach, they are only 11 AU away from each other. The stars are moving into the domain of the planets, and they will gravitationally rip away any planets that aren’t closer than 2 AU around “A” or “B”. Several computer simulations have demonstrated this. If you start the simulation with a system that has more distant planets, as the other star comes in closer, the planets are gravitationally disrupted, dislodged from their stable orbits. The orbits first become eccentric, and then the planet shoots right out of the system. 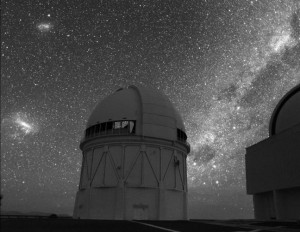 So we’re talking about planets, if they exist, that are inside the orbit of the main asteroid belt in our own Solar System (centered about 2.7 AU from the Sun). Fischer goes on to describe the work using a 1.5-meter telescope in Chile, as well as the Keck and Lick Observatory instruments. Why has a dedicated Alpha Centauri search taken so long? Fischer notes that the game has changed. Early on we were looking at lots of stars to build up a catalog of planets. Now we’re ramping up the precision to try to find Earth analogues. The ‘high cadence’ observations Fischer is making began in earnest on January 1 of 2009 and study Centauri A and B intensively:

We use one telescope, but we nod back and forth. The exposure times are 15 seconds for A, and 30 seconds for B. So we take ten observations of A, and then we move over to B and take ten observations there, then nod back to A and so on. So it’s just one telescope going back and forth. This is helpful because if we see the velocities of both stars just jump up or down for some reason, this will be a clue that there’s some kind of systematic error, and I hope that we’ll be able to track it down.

As to why Centauri B seems the more likely candidate for a planetary detection, Fischer has this to say:

As stars go, alpha Cen A and B are inactive. But, we don’t know if there are velocity fields at the sub-meter-per-second level. The stars are not completely smooth cue balls in space, like pool balls on your table. They have atmospheres, and those atmospheres have flares. In addition, the stars themselves pulsate. We know that Alpha Centauri “A” has a dominant pulsation period that’s about 5 minutes, just like the sun. I’m not really worried about periodic variations of minutes. We’ll be able to average right over that kind of noise. But no one knows whether or not there are long period variations in “A” or “B”. We do know that “A” is probably not as stable as “B”. People have measured pulsation periods in “A”, and in general we find that more massive stars have more active atmospheres. So yeah, I agree that “B” is a better bet. And if you told me that I could only observe one star, I’d choose B. But we’re studying both stars. And it turns out that this strategy of looking at both stars is pretty critical in ensuring a solid set of data. 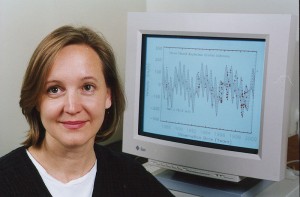 Any signal that turns up will only be what Fischer calls a ‘tiny whisper,’ but a confirmed planetary signature might well boost interest in future space missions like SIM Lite or a direct imaging Terrestrial Planet Finder mission. Interestingly, the Centauri stars seem well situated for the current tricky work from the ground, with an orbital plane of 79 degrees — any planets are assumed to inherit the same orbital tilt. The reflex velocity of the stars is thus more or less along the line of sight from Earth. Were the system perpendicular to us, the radial velocity technique would be ineffective.

Fischer’s instruments, and those of Michel Mayor’s team at La Silla, are sensitive enough to detect a Centauri planet down to Mars size, depending on the stability of the stellar atmospheres. We may well find one or more small, rocky worlds, at which point the question becomes whether or not such a planet could have oceans — we don’t know what close binaries may do to water delivery from asteroids and comets. Whatever the case, though, a Centauri planet in the habitable zone would be a potent stimulus to the imagination and an obvious target for interstellar probes of the future.