Possible Planet Around a G-class Star

We don’t exactly know what to call GJ 758 B, which may be a brown dwarf or simply a large planet of between ten and forty Jupiter masses. But the detection is being hailed as the first direct observation of a ‘planet-like object’ orbiting a star similar to our own Sun. We have the new High Contrast Coronagraphic Imager with Adaptive Optics (HiCIAO), recently attached to the Subaru Telescope and working in the near infrared, to thank for the detection. 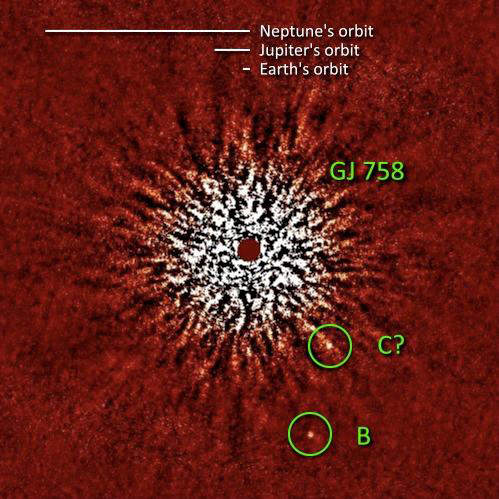 Image: The August 2009 discovery image of GJ758 B and C, taken with Subaru HiCIAO in the near infrared wavelength. Without angular differential imaging, the star’s speckle halo (burst-like feature in the center) would overwhelm the signals from the planet candidates. Credit: Subaru Telescope/NAOJ.

Masking the star’s intense light and using a technique known as angular differential imaging, HiCIAO seems to promise great things in the way of future direct detections of exoplanets, where the object is directly seen rather than having its existence inferred through study of the parent star. Says Marc Kuchner (NASA GSFC): “It’s amazing how quickly this instrument has come online and burst into the forefront. I think this is just the beginning of what HiCIAO is going to do for the field.”

GJ 758 is a G9-class star of about 0.97 solar masses some fifty light years from the Sun. As to the newly discovered companion, it’s currently about 29 AU out, about the orbital distance of Neptune, but we do not yet have further information on the size and shape of its orbit. At 315 degrees Celsius, the object is the coldest companion yet imaged around a G-class star. A second companion of similar mass is suspected at about 19 AU, roughly the orbital distance of Uranus from the Sun. The presence of massive planets at this distance from their primary challenges our current thinking on planetary formation and may help theorists to refine their models. 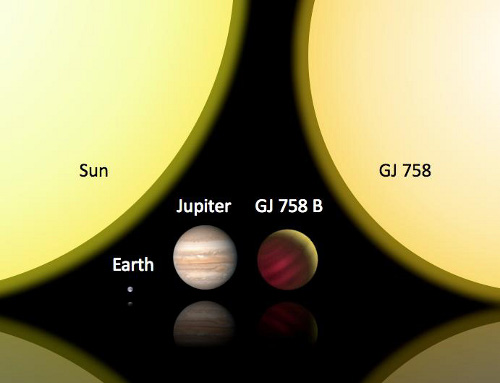 Image: Size comparison between representatives of our Solar System (Sun, Jupiter, and Earth) and the GJ 758 system. GJ 758 B’s temperature of about 315 C makes it glow cherry-red.

“This challenging but beautiful detection of a very low mass companion to a Sun-like star reminds us again how little we truly know about the census of gas giant planets and brown dwarfs around nearby stars,” said Alan Boss, an astronomer at the Carnegie Institution for Science in Washington, D.C., who was not involved in the research. “Observations like this will enable theorists to begin to make sense of how this hitherto unseen population of bodies was able to form and evolve.”